‘IL Volo Sings Morricone’ consists of 14 tracks recalling the Maestro’s legendary melodies, including the first single to be lifted from the album – an absolute gem “The Ecstasy of Gold” from the movie “The Good, the Bad and the Ugly” – out on October 22nd 2021.  For the first time ever, will be accompanied by lyrics written by Andrea Morricone specifically for IL Volo.  It also features “I colori dell’amore” (“The colours of love”), an unreleased track composed by Andrea Morricone for the trio that was unexpectedly performed live for the first time, together with other songs by Ennio Morricone, at a concert held at the Arena di Verona on June 5, 2021.

The album was recorded in the Forum Studios in Rome, with Maestro Marcello Rota conducting the historic Roma Sinfonietta Orchestra, which – since it was established in 1994 – worked extensively with Maestro Ennio Morricone, performing under his musical direction at some of the world’s most prestigious concert halls. The album also features other key collaborations: violinist David Garrett in “La Califfa” (“The Lady Caliph”), Hauser from 2CELLOS in “Se” (“If”) and trumpet player Chris Botti in “Come Sail Away”. IL Volo appeared on stage with Morricone in 2011, at Piazza del Popolo in Rome, to perform “E più ti penso” (“The more I think of you”) on a medley of scores by Ennio Morricone from the films “Once Upon a Time in America” (“C’era una volta in America”) and “Malèna”.

‘IL Volo Sings Morricone’ is destined to go straight to the heart of millions of people worldwide, as it combines the unforgettable melodies by the celebrated conductor, musician, composer and author of some of the greatest film soundtracks in the history of Italian and international cinema with the trio’s unique voices.

For your chance to win 1 of 5 copies of ‘IL Volo Sings Morricone’ album simply answer the question below:

The competition closes on the 14th November.

Our aim is to provide content for 'grown-ups' bringing you the latest lifestyle, travel and recipes. Plus health and finance tips from our expert columnists. Have your say on stories that matter to you and enter our free competitions and most important of all, enjoy 50connect!
Last modified: October 26, 2021 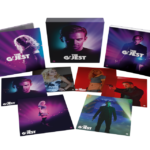 Previous Story
The Guest Limited Edition Blu-rays up for grabs
→ Next Story
Win 1 Year’s Annual Plus subscription to Your Pilates Physio (worth £170)!