Under a Croatian Sun

Anthony Stancomb tells how he gave up the rat race and moved to Croatia … and reintroduced cricket!

During the Serbo/Croatian war, my wife Ivana ran relief convoys down to the refugee camps and it was on one of them that we discovered the island of Vis. We fell in love with it instantly, but what with the war, Ivana continued with the convoys and I with my business, and waited for it to end.

I had started an art promotion business twenty years previously, which had now grown to such an extent that I was finding it increasingly stressful, so I jumped at an excuse to sell both it and our London home and move to the island in search of an entirely new life. 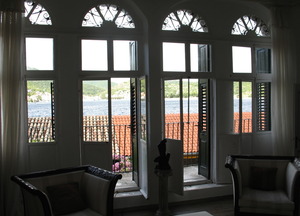 Ivana was actually Croatian, and even though she’d been born and brought up abroad, her parents had taught her a rough version of the language, and we went out assuming we’d be welcomed, but the minute we arrived, we realised we’d landed in a cabbage patch of suspicion. Having spent my last thirty years striding around the world with the determined step and clenched jaw of an English businessman building relationships and getting things going, this came as an alarming set-back.

What to do? Take the ferry back to Blighty with our tails between our legs, or launch a two-person PR campaign to win the buggers over? Deciding on the latter, I took up bar-going like I’d never done before, and Ivana started to befriend all the grannies she could find (she’d always been rather good with that age-group) – and within a short space of time we found ourselves caught up in every family drama, love affair, bitter rivalry and dodgy business deal on the island. This hadn’t been the way we’d planned to gain acceptance, but it certainly did the trick. 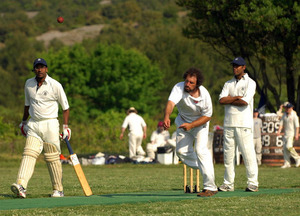 I then discovered that Vis had not only been our base during World War II, but during the Napoleonic War as well, when we had even made ourselves a cricket pitch. So when one of the islanders had the idea of starting cricket on the island again, I rang everyone I could think of to ask for old equipment, and once it arrived, we started to teach a bunch of enthusiastic young men how to play.

We then discovered that EU grants were available for new games in new countries – and hey presto; we had an Astroturf pitch on the medical-emergency helicopter pad, and a proper coach from Manchester. Our first match against a touring English team was something of a hilarious disaster, but the news of cricket being played again on the island after a gap of 200 years was whizzed around the globe on cricketing websites, and clubs from all over the place were wanting to come and play us. I’d told everyone that it wouldn’t be long before the worldwide cricketing community heard about our historic team, but no one had believed me, and everyone was gob-smacked by the response. 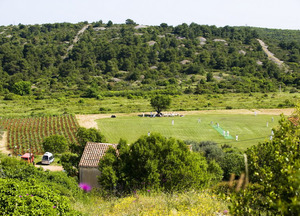 Knowing we now had lift-off, Oliver, the captain, ploughed up a vineyard on his family farm, seeded it, and while the grass was growing, we played on the helipad, practiced on the tennis courts, and were joined by two Englishmen who came to live on the island (I, by the way, am too old to play these days. After five minutes, either my shoulder, my knee or my elbow gives out, and as for seeing the ball…..!) Anyway after a few more games we were winning some of them, and playing in England, Belgium and Spain. In fact, we played so well, we got ourselves into the European Second Division – Howzzat!?

And so it came to pass that I had an extraordinary tale to tell. The story of the cricket, of our comical attempts to win over our new neighbours, of a small ex-communist society trying to adapt themselves to a new world (and of the dents to our pride and preconceptions gained along the way). And for the first time since leaving college, I took up a pen and began to write.

Under A Croatian Sun by Anthony Stancomb is out on June 5 and available from all good booksellers and Amazon here. 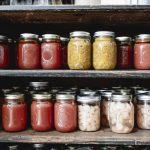 Next Story
The dangers lurking in our cupboards