Rachael Hannan gets a glimpse inside Kia Motors R&D Centre in South Korea and a look at their single person mobility designs in this year’s IDEAS festival.

A flying car, a walking wheelchair and a trolley suitcase that turns into a motorised scooter.  It might sound like Q’s latest haul for James Bond, but these are just a few of the prototypes to come out of the Kia Motors IDEAs festival, as Rachael Hannan found out on a visit to their research and development centre in South Korea.

Eyes widened in disbelief as a driver-less car sped-by the adjacent track at a speed far greater than our own, the vehicle wrapped up like an enigma, camouflaged in a black dust jacket to conceal its true identity.  Like a patchy anorak that left just the roof and windows bare, its homespun-look only added to the empirical and experimental air here. 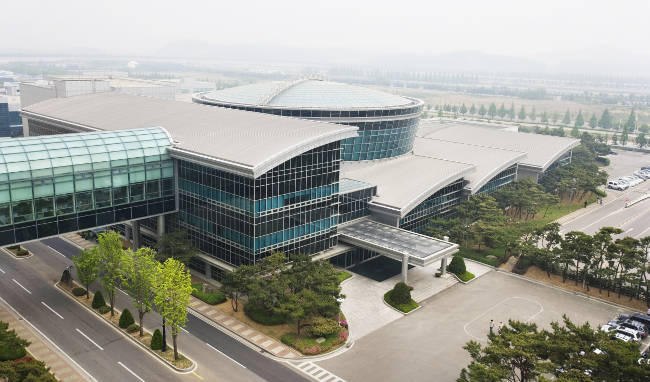 We were on the high-speed circuit on the proving grounds of Kia Motors, in their Research and Development (R&D) Centre in Hwaseong, South Korea. On this track, speeds of up to 250 km an hour are put to the test, either by controlling an empty vehicle remotely, or with a driver inside but effectively driving hands-free. Like a futuristic motorway, the blue lane of the four-lane track allows cars to be electronically controlled to automatically self-drive around it at a constant speed, to reduce human error at such velocities.

It is just one of 36 tracks on the 70 km proving grounds, where new designs and modifications are put through their rigorous paces. As the nucleus of Kia’s design and development, this is an invitation only, no camera zone where 10,000 employees work on everything from end of life recycling and renewable plastics to hybrid, electric and hydro-fuelled cars. But vehicle innovations are not the only thing being prototyped here. Like Google, Apple and other cutting-edge companies, Kia think outside the box, encouraging their employees to step away from their everyday remits to create and develop alternative concepts, that will of course, inform and innovate their vehicles.  Now in its fourth year, the IDEAS festival is an internal competition that promotes fresh thinking with a theme that focuses on individual mobility, with the onus on improving single person mobility around congested cities.

Last year 70 teams applied, and 10 were selected for development over the next five months. Prototypes were built and then judged by 100 engineers, and we were privy to a private demonstration last year’s winner. Among the final designs it pipped to the post were a tilting axis that tips the nose of the vehicle into the air so it can be parked in a smaller space; a multi-rotor flying car, powered by four electric motors and propellers so it can hover above ground to keep the driver above congestion, and a mobility scooter that monitors heart rate and other health indicators, which can linked up to a main computer so carers can check on patients’ health while they are independently on the move. 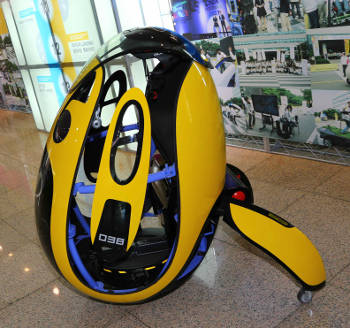 The winning design was a fun, bright yellow, egg-shaped electric mobility scooter that you stand upright in, named E4U. A spinning disc under the feet called a hemisphere structure controls speed and direction, depending on how much the user tilts their weight or turns their feet to manoeuvre it. Designed with a sense of humour, with the handles merging into eyebrows above lights that look like eyes, its top speed is a surprising 30 km an hour.

Later this month the winner of this year’s IDEA festival will be chosen, and among the finalists is a walking wheelchair which uses a lithium rechargeable battery to power a front-wheel-drive motor, with buttons that control the direction and speed. It’s a streamlined futuristic design, far less bulky than a traditional wheelchair, which also transforms into crutches so that it can easily be used on buses and trains. Another is called the Carry-U, which appears to be an ordinary trolley suitcase, but a hidden platform can be pulled out to turn into a motorised standing scooter, or another section extended to form a seat. No airport assistance needed here.

All the designs reflects Kia’s ethos about cars: that they or any other mobility device it seems, is a small space that can be expanded infinitely for human enjoyment. Perhaps not too far in the distant future we’ll be able to buy cars with detachable mobility scooters, that can drive themselves automatically to a set destination whilst monitoring our health, and then seamlessly slot back into the driving seat of a car electronically without the user even standing up.

Next Story
How to cope with bereavement