Michael Edwards is privileged to stay at one of England’s finest country houses in Shakespeare country.

Ettington Park Hotel hasn’t always been in such fine fettle. Back in the 19th century, Evelyn Shirley looked at his centuries-old ancestral home (not yet a hotel for commoners) on the banks of Warwickshire’s River Stour, sadly shook his head and decided that the property was in need of “considerable improvement.”

Over the next five years his architect, Charles Pritchard, a disciple of “God’s architect” Augustus Pugin, created a yellow Cotswold stone neo-gothic fantasy of numerous balustrades, towers and turrets.

Arriving to check-in at what today is a lovingly restored 4* Ettington Park Hotel, it takes a little longer than expected to reach reception. Firstly, Pritchard decided to retain the original house’s grand porch for arriving and departing by horse-drawn carriage. Secondly, there is a beautifully vaulted conservatory. Finally, you arrive at a reception which with its carved alabaster pillars is like walking into an elaborately extravagant wedding cake.

Perhaps, the Grand Drawing Room epitomises aristocratic living. Chandeliers, mirrors and dual aspect views over the 40 acres of grounds are not dissimilar to Versailles’ Hall of Mirrors. But you can’t take morning coffee, afternoon tea or pre-dinner drinks in the Hall of Mirrors – particularly not a quince and elderflower gin nor an award-winning Pure Gold ale from the very local Purity Brewing Company.

A portrait of society beauty Adelaide Guinness reclining on a chaise longue in the 1880s seems to set the tone for the Grand Drawing Room. Once, only the elite were allowed to live above stairs at Ettington Park: Disraeli stayed and, long before the renovations, Shakespeare visited too. Now, more democratically, Ettington Park Hotel, invites us all to enjoy the aristocratic lifestyle, at least for a few days.

Reception provides a map for a stroll around the estate down to the River Stour, past the old limestone mines and back to the orangery and church. There are many idyllic spots to stop and enjoy a picnic hamper that the kitchen can provide.

Initially, the church looks like a carefully planned folly but in fact the transept tower is the long-standing remains of a Norman Church, both partly demolished and carefully restored over the centuries to artfully create its appearance. For more ambitious walkers it is not far to the start of the Cotswold Way.

Guests looking for the ultimate to the manor born experience should book one of Ettington Park Hotel’s high-ceilinged spacious suites, providing a slice of aristocratic luxury-living under the chandelier. In the Victorian Garden Suite, offering dual aspect views of the church and lawns, guests even have a motto, “Je suis loyal”, inscribed above the stone fireplace. Above, a portrait of Queen Victoria and Prince Albert, numerous children and dogs, firmly sets the suite in more leisurely Victorian times.

A Norman arch leads to a bedroom featuring a Venetian four-poster bed. Tall thick-lined curtains ensure that early morning sun does not wake guests. Whilst in the living area there is a two-seater sofa to sit and flick through e-books, magazines and newspapers available on the Handpicked Hotels app. Other reminders of 21st century comforts are a remote-controlled television at the end of the bath, a coffeemaker and a fridge chilling water and fresh milk.

Walking down the grand staircase to dinner guests cannot help but wonder why the Shirley family, decided in 1912, that they would make their home in Ireland.

The Oak Room Restaurant has heraldic crests on the dark wood panelling recalling the Shirley’s matrimonial alliances over previous centuries. It is a grandiose setting for waiting staff to serve a menu whose quality has been recognised with the award of two AA Rosettes. Featuring trout cured in Cotswold gin, Herefordshire port glazed short-rib beef and Kerry Hill lamb, traditional English ingredients are celebrated but there is an adventurous jaunt towards Europe with citrus cured monkfish accompanied by a white bean and octopus cassoulet.

A century on from the family’s departure, Evelyn Shirley’s descendants sometimes return noting that the new blends with the old: there is an indoor pool, sauna and steam room. Today, their ancestral home is looking better than ever. 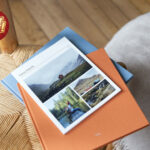 One Reply to “Luxury at Ettington Park Hotel, Stratford-upon-Avon”