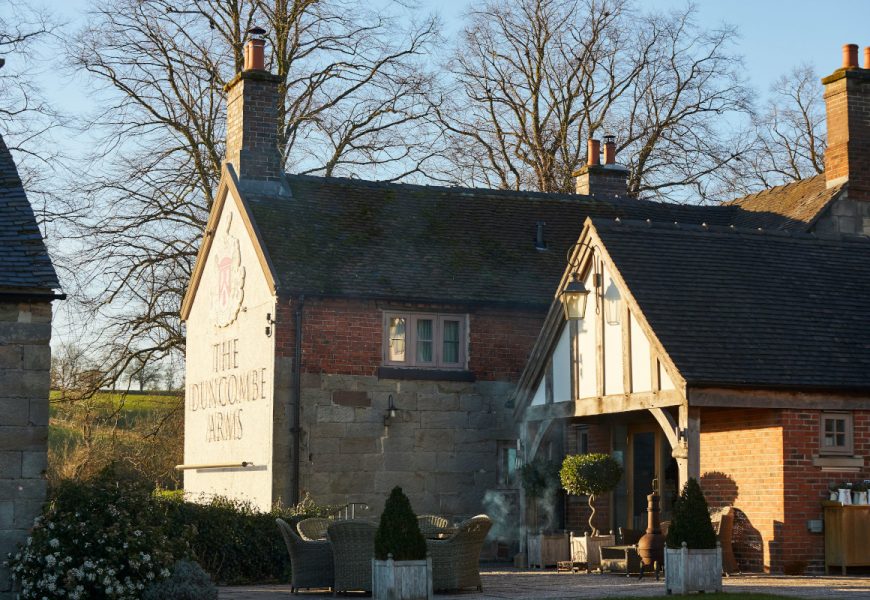 Although the Duncombe Arms, on the road north through Staffordshire heading towards to Derbyshire, is six miles short of the Peak District, you can begin your country escape immediately.

The ten rooms of barn-conversion style Walnut House, named after the tree that sits between pub and accommodation, look out over bleating sheep and pasture running down to the River Dove. Within minutes of check-in you can be walking far from the madding crowd.

Ellastone is the ideal base for outdoor pursuits. You can bike and hike the Tissington Trail, once the Ashbourne to Buxton Railway, or follow any of the numerous routes through the scenic Peak District.

A mere half hour drive away is the poignant National Memorial Arboretum at Alrewas. Amongst its 150 acres of tranquillity and solitude are 25,000 trees and 330 memorials to those who lost their lives serving their country. The “Shot at dawn” memorial commemorates 306 soldiers, some shell-shocked, executed after a court martial trial during the First World War.

In some ways the Duncombe Arms is a memorial itself, a reminder of the warm and welcoming village pubs of yesteryear. Though with a Michelin Bib Gourmand for its food and designer rooms in the country chic Walnut House, the Duncombe Arms elevates the concept of “pub with rooms” to new levels of luxury.

But don’t let your wallet be intimidated by the Michelin tag. A Michelin Bib Gourmand is awarded to restaurants providing Michelin quality food at a reasonable price.

Chef Jake Boyce serves the food that diners want to see on a pub menu but with some imaginative sourcing. The beef on the menu is rubbed with Himalayan salt before being hung for 36 days. Boyce is constantly on a quest for lost tastes. A rare Golden Beetroot brings a mellow favour to the torched mackerel starter. Potatoes are sourced from a supplier who gives a choice of more than 100 varieties.

A decade ago, The Duncombe Arms, at the heart of village life since the 1850s, was derelict. Every time that Laura Greenall drove past was a painful memory. Check-out the Duncombe family tree in the bar and you will find that before marriage, Laura was a Duncombe. Family coats of arms on an exterior wall and displayed in the pub celebrate that heritage.

“Really, the pub is just an extension of our home,” says Laura gesturing at family photographs around the timbers and exposed brick that make up the warren of books and crannies. Framed obituaries recall the jazz musicians, horse folk and celebrities who have made an impact on the Greenalls’ lives. Flowers cut from the Greenall’s garden decorate the pub.

Husband Johnny learnt his trade in the family brewery, so it’s no surprise that the pub offers a Duncombe Ale and a wider range of gins, wines and whiskies than you would expect in an average hostelry.

After the pub reopened in 2012, it soon became apparent that The Duncombe Arms was attracting visitors from afar. So, the Greenall’s next project was to create 10 rooms in Walnut House.

Every room has a rural view over the River Dove. Room names such as Ashbourne blue, hops, game birds and peony continue the country theme and are an interior design lesson. In the green room an emerald green designer wallpaper rises up from an oatmeal rug framed by a pistachio green border. Green themed artwork flows into the hunter green curtains.

Walnut House is an art gallery too. Laura’s friend, Robin Light, from London’s Kalman Crane Gallery brings up work to display. If guests wish to buy a piece they can make any offer.

Another unique feature for a pub with rooms is that guests are given a map of the grounds of Wootton Hall’s Woodland Gardens, Johnny and Laura’s house, and invited to take a tour. Whilst exiled from France in the 1760s, philosopher Jean Jaques Rousseau founded the garden. By 1860 there were 15 gardeners at work on the grounds which feature trees from throughout the world. Full of autumnal colours, the gardens are looking at their best, perfect for a peaceful walk far from this year’s problems. 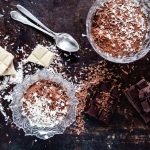