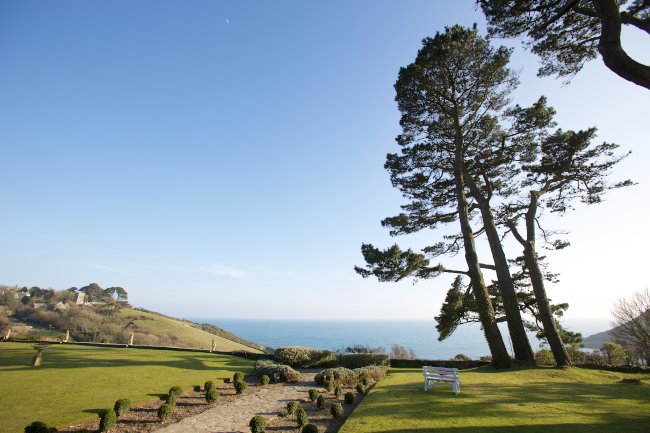 Warm Gulf Stream winds encourage geraniums to bloom early and palm trees to thrive in a Mediterranean-style garden, reminding visitors that it is only a short drive to The Lost Gardens of Heligan and the Eden Project. Around the croquet lawn, the sun-loungers stay in position through winter, for guests to snatch a few hours of sun.

As you walk through those gardens to reception, sculptures of a pig, galloping horse, fairies, pixies and a sun-bathing balding senior citizen send the message that Talland Bay Hotel is different, quirky and with a sense of humour.

As well as having a unique floor plan every room has its own distinctive style. One room may have wood-panelling, a Queen Anne style dressing table, ethnic African style ebony statues and scattered sea-shells while its neighbour may be a tribute to New England seaside pastels. 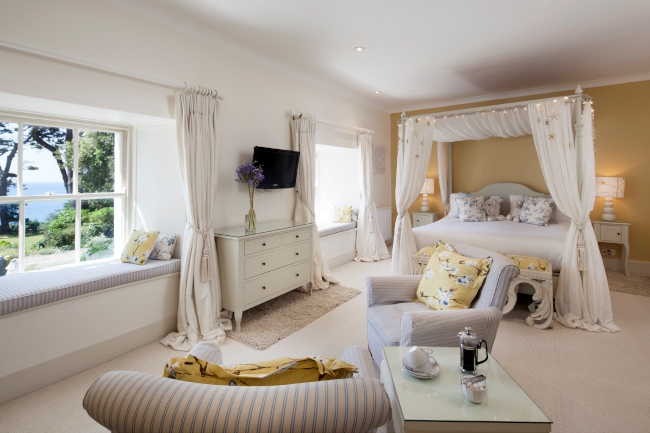 Sat on the 630 mile South West Coast Path, guests can turn left to climb flights of steps towards the fishing port of Looe. Raynor Winn whose inspirational book, The Salt Path, tells the story of completing the epic trek in the face of illness and poverty, says that even the blackberries taste salty.

Although it is only just over a 3 mile walk to Looe, allow 90 minutes for testing terrain. Walkers feel that they’ve earned their tastes of Cornwall: crab sandwiches, clotted cream teas, ice-creams and pasties.

Heading west it is a flatter forty-five minute walk to Polperro, with its fishing harbour and cottages perched on the hillside. Polperro is frequently a contender for the title of England’s prettiest village.

Nick Hawke, Talland Bay Hotel chef, is an authentic and inventive Cornish food hero. His grandmother ignited his passion for food – teaching him to make jams, jellies and pea pasties in her cottage close to nearby St Austell.

The food in The Terrace Restaurant celebrates the best of local produce. The menu changes as the first rhubarb sprouts, as asparagus comes into season and tender spring vegetables appear. Hawke is forensically fussy, continually tasting and testing. Recently the mussels failed his taste test, so he has switched suppliers. 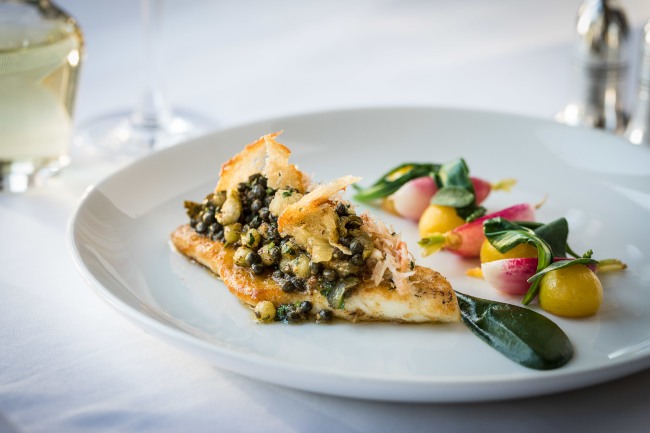 Mussels, prawns, red mullet, scallops and turbot are at the heart of the menu. An amuse bouche of crisp red mullet on ceviche fennel typifies the creativity. Beef and lamb come from Devon and Cornwall’s moorlands, supplied through premium butchers who paper-wrap the meat, rather than seal it in plastic, to ensure that excess moisture does not damage the texture. With many guests booking in for several days at the hotel the menu changes twice a week.

“We try to stay here once a month,” said one pair of returning guests. The hotel has a loyal core clientele who visit time and time again. One of Talland Bay Hotel’s key draws is that it welcomes dogs with its “Wallace and Gromit” breaks. Dogs are given a biscuit before their owners have even checked in. It’s just a five-minute steep down-hill walk to the small shingle beach where dogs can frolic in the gentle waves.

Dogs are welcome in the Bistro in the conservatory but not the fine-dining Terrace Restaurant. At breakfast waiters provide a sausage for canine guests and there’s always a supper time treat too. “A lot of hotels say that they welcome dogs but they genuinely mean it here,” said one owner as a waiter handed him a paw-print blanket.

“That’s why we drive 6 hours to visit three of four times a year. Jet loves it,” said one guest gesturing at one exhausted black Labrador. 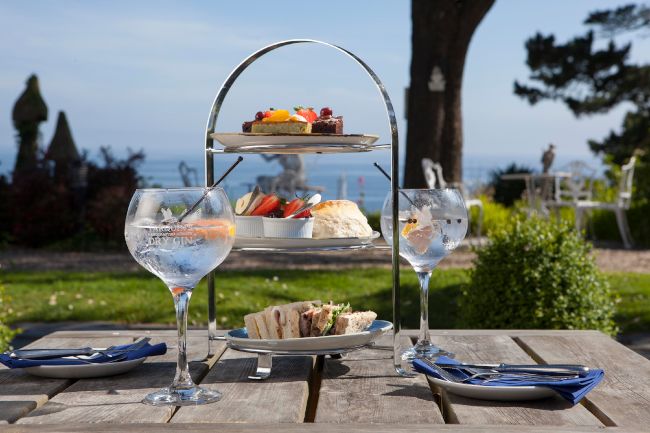 “Oh and for the view … and the food … and the fantastic rooms … and the impeccable service … and Cornwall,” his wife added remembering Talland Bay Hotel’s very many advantages. Clearly, they were not there entirely for Jet’s benefit.

“And the 70 gins behind the bar,” her husband finally concluded. 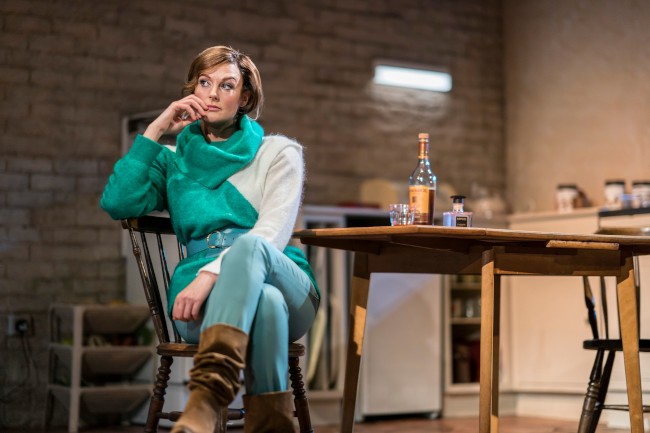 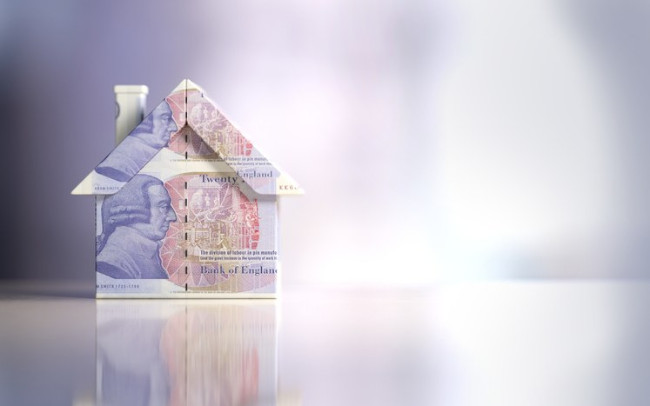 Next Story
Pay off your mortgage?