Travel to the places that inspired your favourite authors.

These Top 10 literary destinations have either been the home or inspiration to many of the greatest writers in Western civilization, and feature remarkable attractions as tributes to those authors, for travellers to enjoy today.

London was the birthplace or home of many of the greatest authors of all time, including Charles Dickens, Geoffrey Chaucer, John Milton, John Keats and HG Wells, to name a few. Visitors can stop by the home of Dickens, see the house where Benjamin Johnson wrote the first comprehensive English dictionary, or go on one of many guided walks that let you follow in Sherlock Holmes’ footsteps.

2. Some are Born Great: Stratford-upon-Avon, England

Birthplace of William Shakespeare, Stratford-upon-Avon is a Mecca for the literature enthusiast. Travellers can catch a glimpse into The Bard’s early life, see the magnificent Royal Shakespeare Company perform, or pay tribute to the father of modern literature at his final resting place.

3. The Game is Afoot: Edinburgh, Scotland

We have Edinburgh authors to thank for some of the world’s most beloved stories and characters, from Sir Arthur Conan Doyle’s Sherlock Holmes to J K Rowling’s Harry Potter. Take a walking tour of Edinburgh’s medieval Old Town to learn about Scottish literary characters and history, or celebrate the contributions of authors Robert Burns, Sir Walter Scott and Robert Louis Stevenson at the Writer’s Museum. Paving stones approaching the museum commemorate Scottish writers.

Dublin’s greatest authors from Yeats to Heaney have often used their home city as their inspiration, evident in James Joyce’s Dubliners and Jonathan Swift’s satirical A Modest Proposal. Literature enthusiasts will want to make the pilgrimages to the James Joyce Tower and House, as well as visit the Dublin Writers’ Museum and the National Library of Ireland.

A unique destination for its small size and depth of literary history, Concord is the site of Walden Pond, inspiration for Thoreau’s “Walden,” and the house where Louisa May Alcott wrote Little Women. Ralph Waldo Emerson and Nathaniel Hawthorne also called Concord home in the 1800s, and for the ultimate literary pilgrimage, visit the final resting places of all these literary giants in the Author’s Ridge section of the Sleepy Hollow Cemetery.

Paris’ literary history – from French authors like Victor Hugo, Voltaire, and Alexander Dumas to Americans such as Gertrude Stein, Ernest Hemingway, F Scott Fitzgerald and others of the ‘Lost Generation’- is rich and diverse. With its famous book stalls (Les Bouquinistes) lining the Seine, and famed literary cafes like les Deux Magots, frequented by greats like Hemingway and Albert Camus, the City of Light’s literary vibe lives on.

8. See with the Eyes of Angels: San Francisco, California

No top 10 literary destinations list would be complete without a nod to San Francisco. When Ginsberg and Kerouac moved from New York to San Francisco, they brought their new literary style with them, establishing the city as a new hub of the “Beat Generation.” See the site of their famed first poetry reading, along with others of their circle like Philip Whalen, at the Six Gallery, or visit the popular City Lights Bookstore, founded by Beat poet Lawrence Ferlinghetti, which brings writing and progressive politics together. Buy a copy of Howl at City Lights Books, read it over a beer at the Vesuvio Cafe, you might be sitting in a seat where Kerouac sat.

Birthplace of some of the world’s most influential literature, Rome was home to ancient greats like Virgil, who penned The Aeneid. But Rome’s literary importance has continued to the present day, with foreign authors like Keats, Shelley, James and many more coming to draw inspiration from the centre of the ancient world. Be sure to visit the Keats-Shelley House on Rome’s historic Spanish Steps, a site visited by many other authors and artists throughout history.

With its remarkable history highlighted by Leo Tolstoy, Anton Chekhov, Alexander Pushkin and Fyodor Dostoevsky, St Petersburg is a renowned literary destination. Dostoevsky inhabited a number of apartments throughout the city, and in his last, where he wrote The Brothers Karamazov, there is now a museum dedicated to his life. Walking tours also allow visitors to see the city through the famous author’s eyes. Refresh your memory of the tales and cast in the stories as told by Gogol and Dostoevsky and others and you will see most of the locations, streets and even boarding houses just as described.

Planning a trip to one of our top 10 literary destinations?

Under current conditions it would be wise to check gov.uk to understand what travel restrictions apply within particular regions.

Do you agree with our top 10 literary destinations? Why not let us know in the comments below or visit out Travel channel for other travel reviews and ideas. 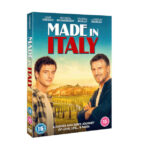 Previous Story
WIN MADE IN ITALY ON DVD
→