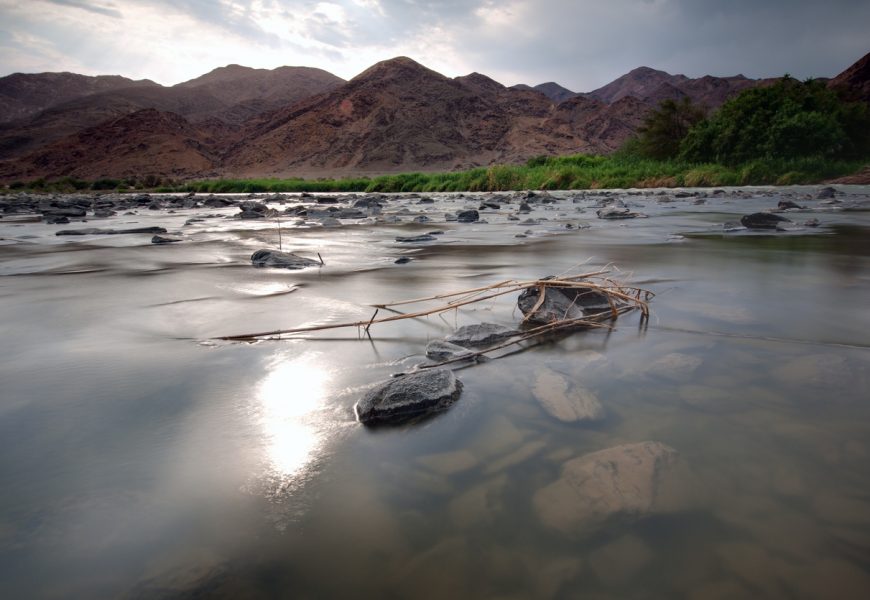 Take a look at aerial photographs of the Orange River as it flows from Lesotho into South Africa. Amidst the arid sandy beiges of the Kalahari Desert there’s a narrow strip of green land, either side of a river named after William of Orange. Occasionally you’ll see spear-high bamboo neighbouring wild asparagus. You will see acres of vineyards too, for this is Wine Country. 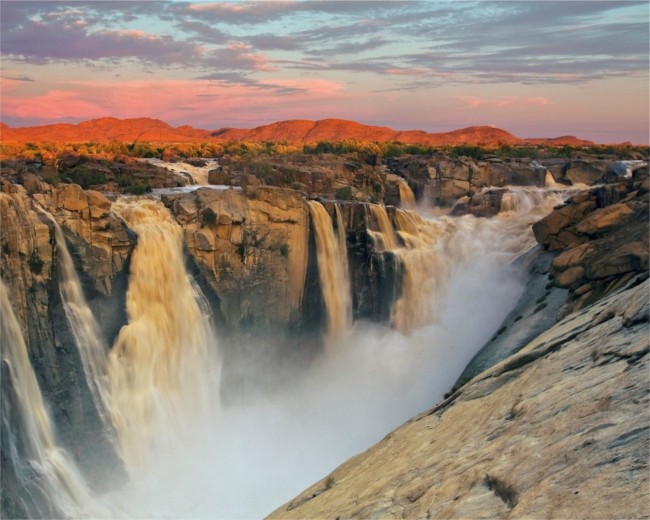 Nineteen waterfalls combine into a torrential boom, in the peak season between March and May, to send up to 405 million litres of water cascading 56 metres into the gorge below. Surrounding Augrabies Falls there is a rocky lunar-like landscape, appropriately you can look over to the Falls from the Moon Rock viewing point. Legend has it that alluvial diamonds are power-washed from the eroded rocks.

Wide well-lit boardwalks take you to the World’s sixth highest falls for floodlit viewings or, if you are very lucky, a daylight rainbow. But as the National Park’s slogan says – Augrabies is much more than just a waterfall.

Most visitors to Augrabies have already spotted Safari’s Big Boys – elephants, lions, leopards, rhino – elsewhere on their South African travels, at places like the Kruger National Park. The Augrabies Falls National Park is a great add-on destination. This is a safe environment were you can explore on your own: by bike, on foot or on a kayak without worrying that you may become “Dish of the Day” for the local wildlife. Dotted around the park there are 50 campsites and 3 essential swimming pools for cooling off.

Many visitors relax in Augrabies after a city break to Capetown, Durban or Johannesburg. They fly into Upington, a quiet town in the middle of an Ayers Rock Landscape. Although Augrabies is just an easy 75 mile drive west it is worth taking your time. 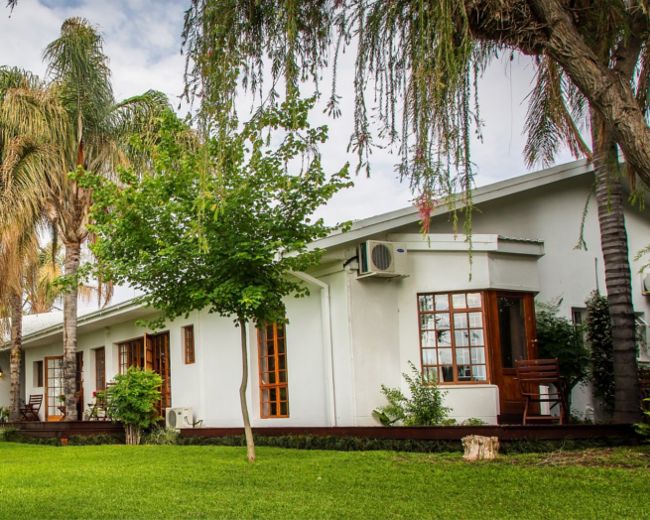 Take a vineyard tour but if you are driving save your wine-tasting for a day or two at the idyllic African Vineyard Guest House. Every room is named after a grape or wine and there’s an impressive wine list to accompany lunch and dinner. As well as converting a barn into spa there is a peaceful outdoor woodland spa too.

Another worthwhile stop is at Kalahari Safaris where you can peacefully raft along the river before trying your hand at tag and release fishing. The fish love the curry-dipped bread balls so much that they seem happy to be caught over and over again.

Within Augrabies National Park, spacious air-conditioned chalets – with a terrace for the inevitable braii – are a great outdoors antidote to city-living. Augrabies’ most desirable residence, especially for honeymoons, is Oranjekom Gorge Cottage, with two picture windows over-looking the Falls and the Gorge. A romantic spot for taking advantage of Augrabies’ Dark Skies for spectacular views of the Milky Way. 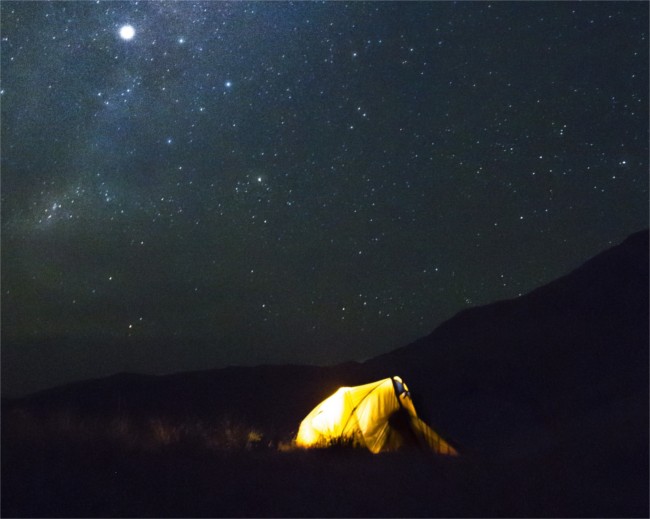 Whatever your accommodation you choose, beware of baboons and monkeys, always ready to help themselves from the braii – South Africans love BBQ. They’ve even mastered the art of using the shop’s automatic doors to shoplift their food straight from the shelves.

They are just two of Augrabies’ 47 species of mammal including giraffes, gemsbok, springbok, Hartmann’s mountain zebra and aardwolf. In fact, some numbers have grown too rapidly for all to survive in this arid land. After a recent census rangers decided that they needed to capture and relocate some Springbok to preserve the natural balance. And how many leopards did they count in the census? “They’re nocturnal and difficult to track down. There may be two, perhaps three,” our guide says, hazarding a guess.

A sunset game drive, with an experienced Park Ranger, is a good way of getting a feel for the sheer scope of the park and its possibilities for leisure. The Ranger explains how the indigenous people lived a hunter-gatherer existence for probably twenty millennia, the women collecting plants and grubs whilst the men tracked animals with their bows and poisoned arrows. Today the only evidence of their existence are occasional cairns of stones making their simple graves.

Once you have oriented yourself you can pick up maps for biking or hiking from reception. The Gorge Trail is a gentle stroll at just 2km but the Klipspringer Trail, at 38.5 km, is an epic three day adventure giving you the freedom of Augrabies.

Park entry fees start from R192 (£11) per adult per day for international visitors.

Visit South African Airways to put together your journey. 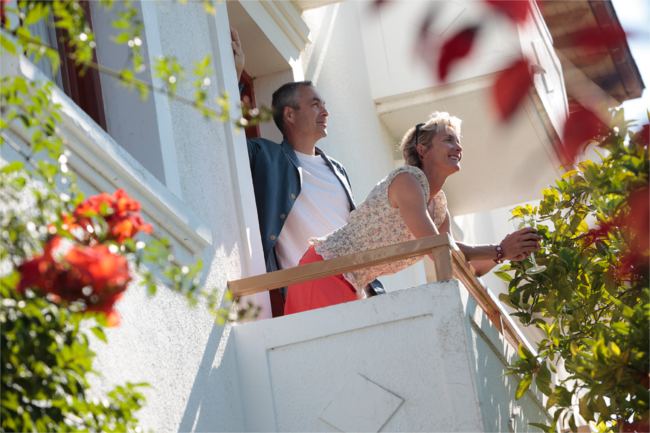 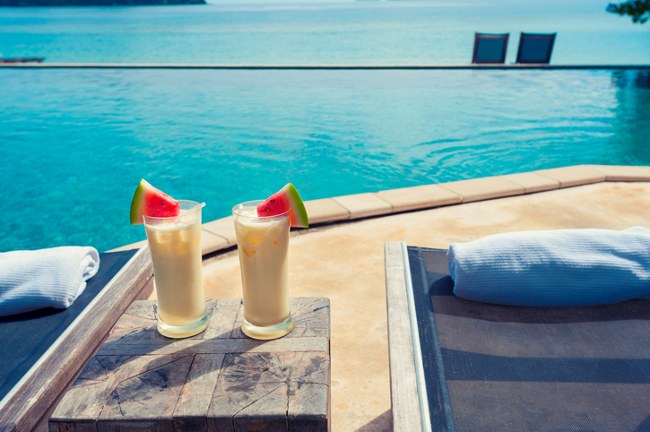 Next Story
A holiday fit for social media braggards