Rachael Hannan travels to South Korea and finds UNESCO world heritage sites, discovers the delights of gogi-jib and optimism for future reconciliation with the North. 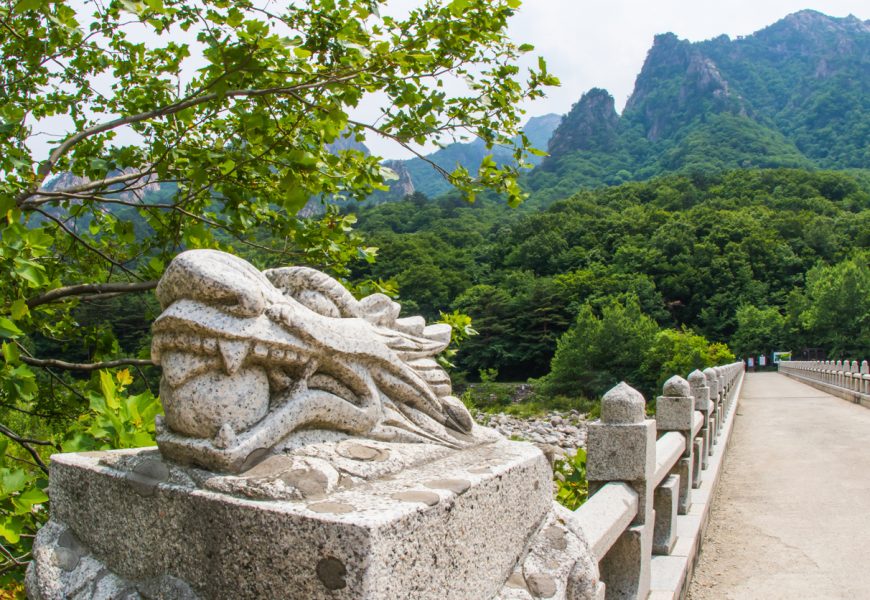 Often overlooked as a holiday destination in favour of neighbouring Japan or China, South Korea is safe and reasonably priced, with much to discover among its glorious mountain vistas.  Home to some of the world’s biggest brands including Samsung, Hyundai and Kia Motors, it is a renowned high-tech, manufacturing powerhouse, with the capital, Seoul its 24-hour economic hub.  Yet this is just one aspect of a complex personality, and that is what makes South Korea a fascinating location.

Coupled with a potent ‘work hard, play hard’ ethic, it is a country that appreciates nature, and one that holds tightly onto its traditions whilst simultaneously embracing modernity and technology.  There’s a deep respect for spirituality and religion, whatever the faith, while underneath the sobriety of courtesies and customs, belies a definite joie de vivre.

We were here for a week, splitting the time between Seoul (pronounced Suh-ool) and Gyeongju, the old capital of the ancient Silla Kingdom in the south east, with a tour of the Demilitarized Zone, the historically volatile border between its communist neighbour North Korea also planned.

In spite of its high-rise façade, Seoul is a city that feels as if it is has been dropped into nature, rather than trampling through it.  Built in and amongst the majestic Bukhan-san mountain range, its ten peaks and lesser tributaries form a protective oval around the city, softening the modern contours and creating a picturesque skyline in which nature is still paramount to the man-made.

Below the peaks, the city emanates from the meandering curves of the Han River (Hangong), which crosses it horizontally from east to west, to create a north and south side.  With stretches a kilometres wide, the river adds a reflective, watery element beside the creeping traffic, high-rises, uniform apartment blocks and church spires, each vying for their piece of the skyline. 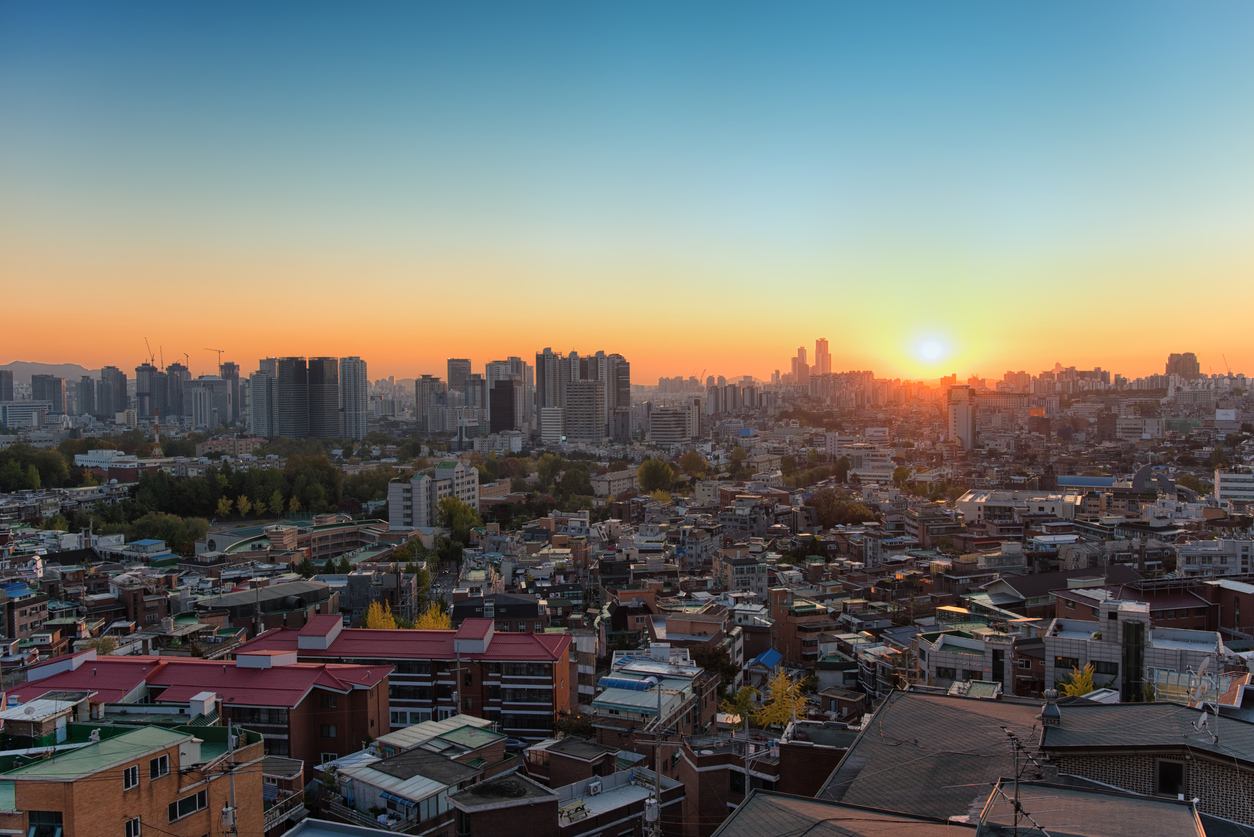 One of the best places to immerse yourself in the skyline and leisurely absorb the city is at the Grand Hyatt hotel in the Yongsan district. Designed to frame the city from every single one of its monumental windows you are never short of a breathtaking view, whether its from the lounge bar after an afternoon in the spa, relaxing poolside or watching the sun rise over the city from your room.  From here you are in prime position to explore, and Seoul is a particularly safe city to adventure in, even at night – a fact its inhabitants are rightly proud.  Taxis are very reasonably priced and the Seoul Metropolitan Subway has been hailed the best in the world.

For a taste of Seoul’s past, start in the Insadong district with a 90 minute tour of Chandeok Palace (Changdeokgung) in Jongno-gu.  One of five palaces constructed when the Joseon dynasty made Seoul their capital in 1394, it has a spectacular Secret Garden with a jade stream and enchanting forest.  Afterwards, refresh yourself at a traditional tea house in Insadong-Gil, a ten minute walk from here.  This area was where the Joseon bureaucrats and merchants lived, and down charming meandering alleys are traditional buildings of old and restored architecture, antique shops, art galleries, and places selling traditional wood carvings, ink paintings, pottery and cultural souvenirs.  One of the oldest tea houses is Sin Old Tea House (Sin Yetchatjip), found down an alley off the main Insadong Road, housed in a traditional Korean hanok,  with lush gardens and a resident pet parrot.  But try a few; each has a unique style and flavour as diverse as their range of speciality house teas.  You’ll also find Seoul’s largest Buddhist shrine in Insadong-Gil at the Jogyesa Temple.  Set within pretty gardens, it is the headquarters of the Jogyesa order of Korean Zen Buddhism.

If it’s the upmarket you’re after, across the Han River a short taxi ride away from the hotel is Gangnam, the district that inspired Korean pop-star Psy’s chart-topping song, Gangnam Style, which satirises high-class Seoulites.  It is home to the most expensive real estate in the city, with designer shops, trendy bars and top end restaurants. For cheaper retail therapy and a more regular evening experience, head to the Avenue of Youth.  Although it promises no elixir, underneath the neon lights of the high-street stores selling clothes, trainers and cosmetics, is a vibrant night market with food stalls emitting a delicious diversity of smells, from an array of unusual looking food. There’s plenty to try, from skewers of meat, dishes of octopus, pork and dried squid, to hotteok, a sweet Korean pancake filled with nuts and cinnamon, or honeycomb discs with personalised engravings on them, made by a lady sitting on a low stool in front of a gas burner and skillet. 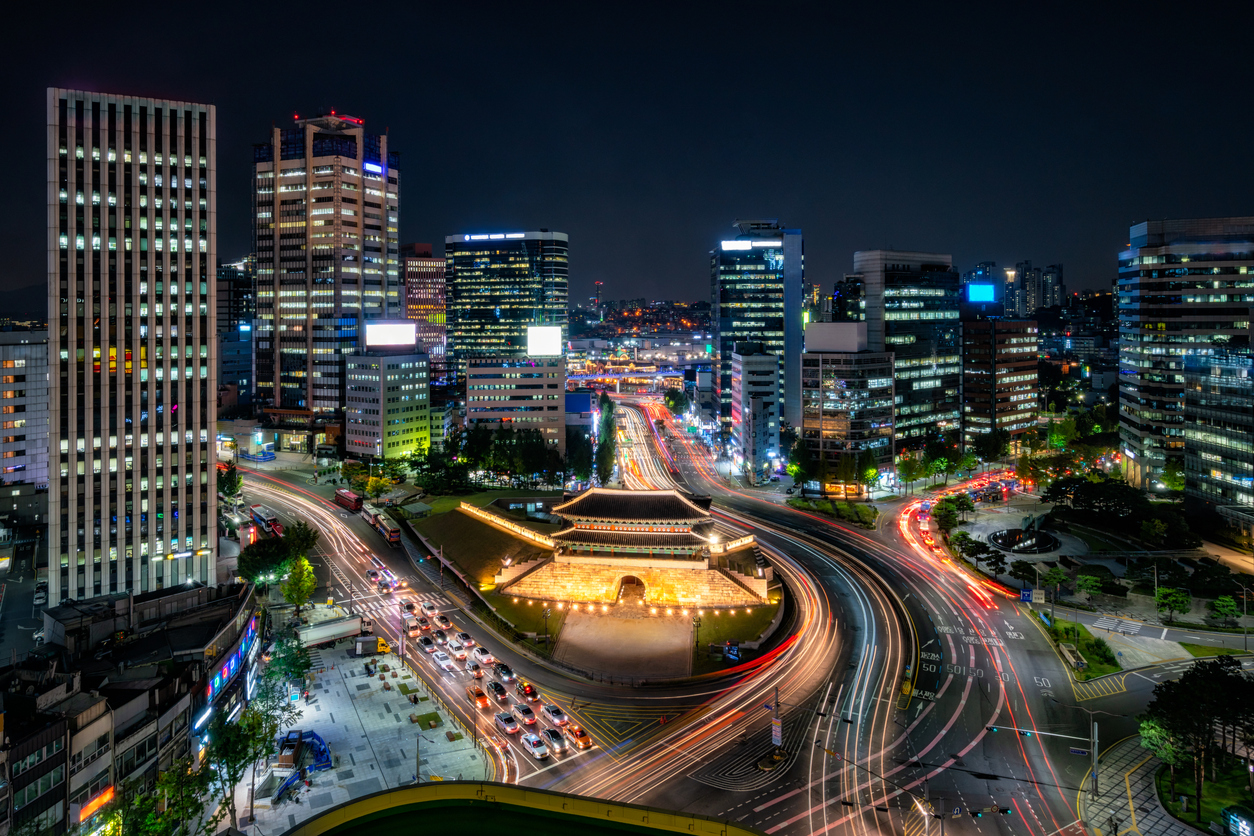 End the evening by joining the hand-holding couples in a stroll along Cheonggyecheon stream, a reopened narrow waterway that is lower than street-level and atmospherically lit with a romantic air. Take the stairs back up to street level at Sungnyemun Gate, one of six remaining 14th century gates from the old fortress wall, and a good place to hail a cab home.

The diversity of food in South Korea is unremitting, from street stalls and local cafés to gimbap, the Korean take on sushi, flavoured with sesame seed oil and eaten with sweet pickled radish. One experience you won’t want to miss, and one you’ll want to repeat several times before you leave is a traditional Korean barbecue.  At a gogi-jip, which literally means ‘meat-house’,  meat, usually beef ribs (galib) are cooked on a hot plate at your table and served with a rainbow of side dishes (banchan).

These include several varieties of kimchi, the fermented vegetable dish South Korea is famous for, which is usually cabbage but often radish too; a basket of lettuce leaf varieties with tastes as varied as their hues; bright orange sweet potato purée blended with walnuts, and russet red ssamjang, a delicious tangy spicy fermented soya bean paste, flavoured with garlic and honey, used like a salsa. The diner puts a piece of cooked meat into a lettuce leaf, tops it with sides and then folds it into a neat parcel that can be elegantly eaten in one mouthful. Although don’t fill up too much; unbelievably another course follows, usually a stew served with rice or noodles. Wash it down with soju, a Korean clear spirit drunk in small shots, or the rich, sweet and very palatable raspberry wine – but remember, it is customary to never pour your own drink, only other peoples’. 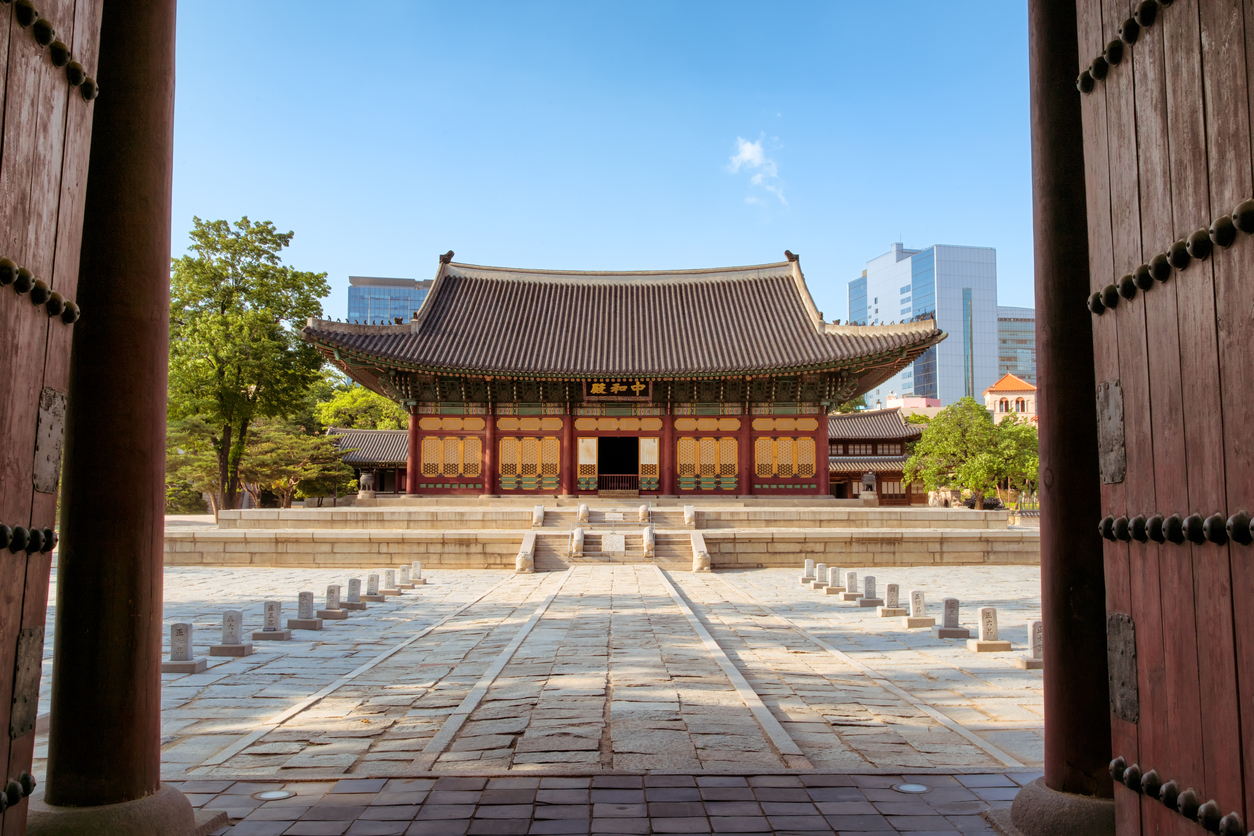 High-speed trains connect Seoul to the rest of South Korea and with speeds of around 300 kilometres, it takes just under 3 hours to reach Gyeongju in the south east of the country. Known as the museum without walls because it has more religious and historic remains than anywhere else in South Korea, it feels as if you have stepped back into a by-gone era, that’s saturated with an air of peace and tranquillity. Rows of hanoks, the traditional Korean buildings with triangular roofs and upturned eaves, sit against a layered mountainous backdrop that disappears into the horizon.  While in the surrounding terraces of vibrant green rice paddies, vegetable gardens and fields of billowing bright orange cosmos flowers are the temples, burial grounds and palaces this area is famous for.

This was the heartland of the Silla kingdom, which ruled the south east of the peninsular from 57 BC for over a millennia, expanding their territory to include most of Korea by the 7th century. At this time, they also converted to Buddhism and among the rising mountains around Gyeongju are two famous Buddhist Temples that are both UNESCO World Heritage Sites, and accessible by taxi or bus. Bulguksa is an active temple containing several designated Korean national treasures including two stone pagodas and two bronze Buddha statues, while just 4 km further up Mount Tohamaway is the 8th century Sukgulam Temple, where an enormous, ethereal stone seated Buddha sits meditating in an ornately carved cave temple.

One way to enjoy the sweeping views and see the sites on ground-level is by bike. These can easily be rented for the day and English maps with cycle routes can be obtained form either one of the two tourist offices beside the train or bus station, both of which have English speakers. A circuit takes in the otherworldly Tumuli Park which contains 23 tombs of the Silla royals, large surreal grass covered mounds much larger than those on Salisbury Plain, that mirror the mountains in the background. The serene 7th century pleasure garden built around Anapji Pond, Cheomseongdae, an 8th century astronomical observatory, and Bunhwangsa, a temple complex which contains South Korea’s oldest stone pagoda.

Recharge and ease well-cycled legs in your private plunge pool at Ragung, a luxurious boutique hotel in Millennium Park. Guests stay in individual, lavishly decorated wooden chalets, modelled on a traditional Korean house, built around a lake, to capture the traditional experience of a Korean home in layout, design and style, with low tables, mahogany furniture and wooden shutters. The enclosed private plunge pools are fed from the local spring, and traditional Korean food is served in the restaurant. 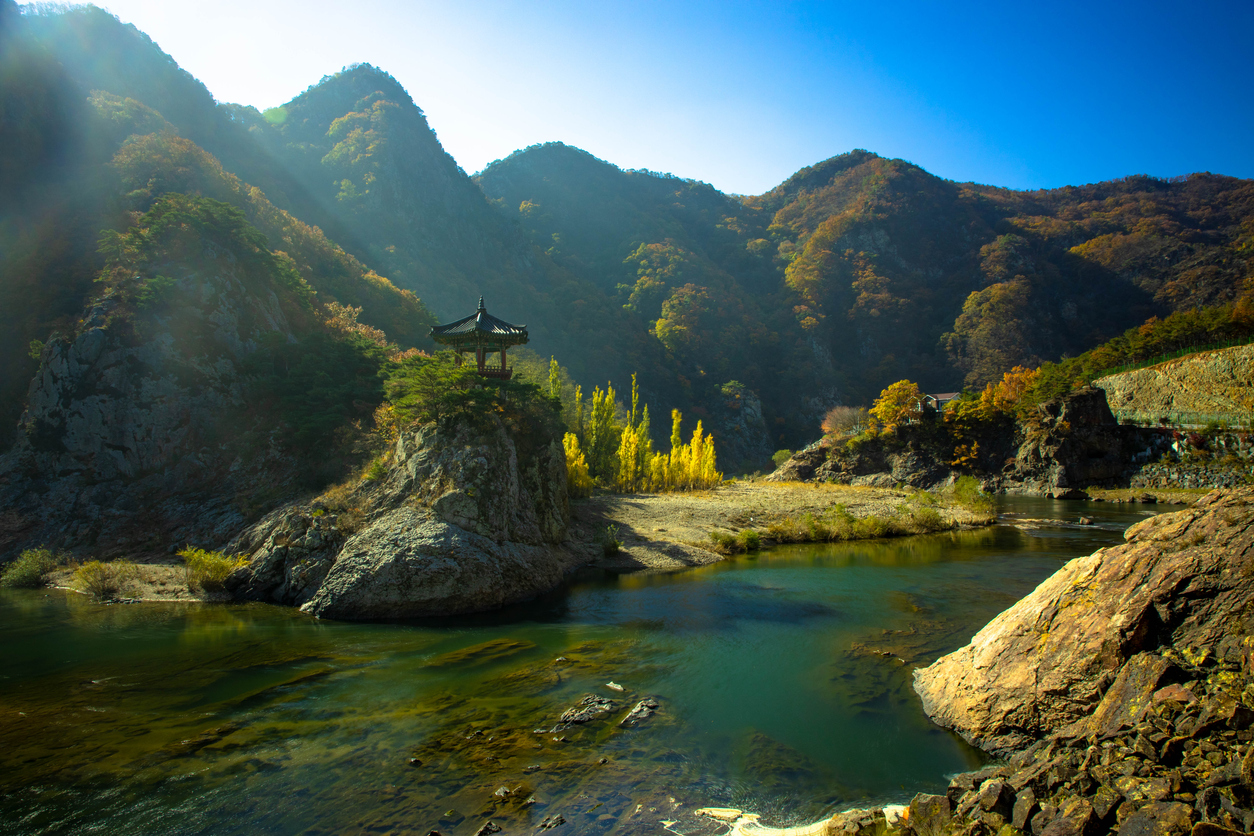 A trip to South Korea would be incomplete without a visit to the demilitarised zone, known as the DMZ., pronounced with the American inflection ‘zeee’. One of the most heavily armed borders in the world, a trip here is like the rest of South Korea – a surprising blend. It is part fascinating museum, recounting the history that lead to the division; part fierce reality with barbed wire fences and stern-looking army guards conducting sincere passport checks before entry, and part first-hand experience as you descend 300 metres into the damp and claustrophobic 3rd tunnel discovered in 1978, wearing hard hats.  It is also part tourist theme park, with sea-side style coin-operated binoculars to peer over the border into North Korea, and souvenir shops selling DMZ. branded ashtrays, t-shirts, boxes of chocolates and even bags of rice.

At every stop there is a strong, optimistic reconciliatory message however, either visually represented in the many sculptural monuments, or plainly stated. Blazoned across the building at the viewpoint over the border it reads, ‘End of separation, beginning of unification’; while a sign at Dorasan train station optimistically says, ‘Not the last station from the south, but the first station north.’

Tourists can only visit on an organised trip which can be booked in Seoul, and includes travel to Imjingak 30 miles away, from where the well-timed tours start.  It is certainly a trip worth doing, if only for the South Korean juxtaposition, which as always, is never quite what you expect. 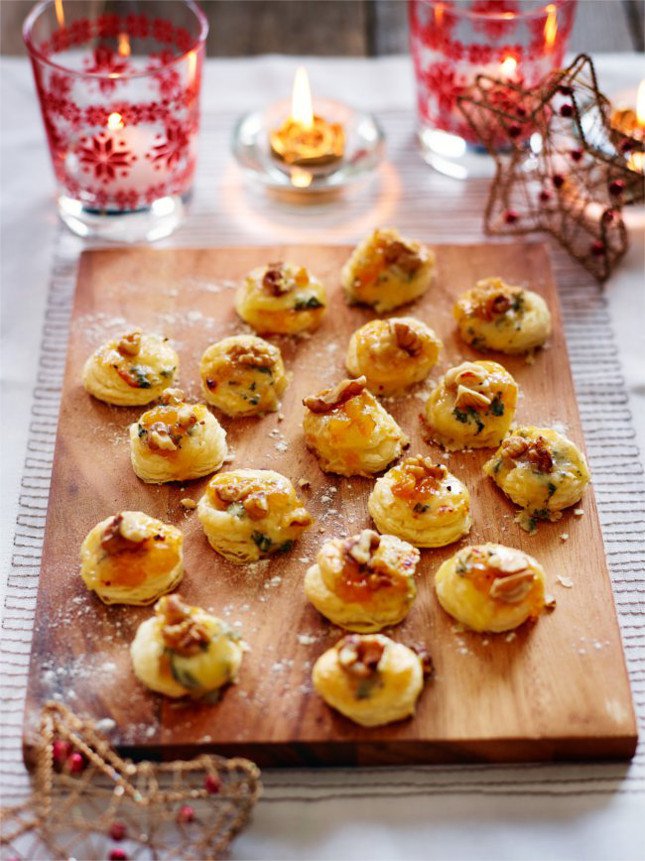