When the heart-warming show, The Darling Buds of May was screened from 1991 to 1993 it was the most popular TV series in Britain and acclaimed internationally. Since then the box set has sold millions. Produced by Yorkshire Television for ITV, the show, with its stellar cast, was based on the novel written by H E Bates in 1958 and its sequels. The phrase ‘darling buds of May” comes from Shakespeare’s Sonnet 18.

Simon Coulson, at the age of 20, sat transfixed by the TV in his granny’s cosy living room, after a hearty roast dinner, and fell in love with the mesmerising beauty of sultry teenage Catherine Zeta-Jones and the idyllic rural lifestyle glorified in Darling Buds of May. In fact the charming show set in beautiful Kent in the optimistic era of the 1950s captivated not just Simon but the whole of Britain and viewers around the world.

Now at 44, Simon, as proud owner of the Darling Buds Farm, is a man who is truly living his dream. At the start of 2013 he bought the run-down Larkin farmhouse and derelict historic buildings set on 35 acres of prime countryside for a flat one million pounds.

And two years, spending another cool million, he has restored and renovated the sprawling property into magnificent holiday accommodation for escapees from the pressures of the daily grind whom long to embrace the romance and nostalgia of the Darling Buds of May and the homespun values of the loveable Larkin family.

Crews of specialist workmen have restored and modernised the original Oast House and cart lodge to immaculate, luxurious standards. The spacious 300- year-old barn conversion with original Tudor timber beams is spectacular. There’s even a traditional village hall. And the ramshackle farmhouse, featured in the TV show, is being lovingly transformed with funky retro furnishings.

The impressive buildings are surrounded by lush fields, tranquil duck ponds and a tinkling stream, pretty apple and cherry orchards, groves of ancient oak trees and woodlands bursting with spring bluebells and wildlife and yes, if you are lucky, you can hear the amorous singing of nightingales! 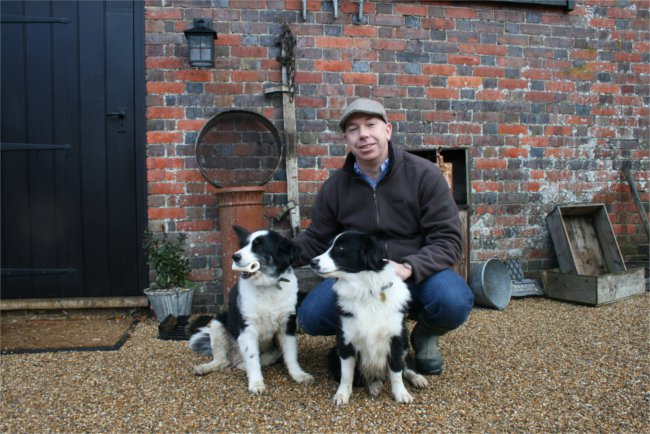 Simon lives in this little slice of heaven with his three bouncy border collies and his six-year-old son shares all the fun of the farm with his dynamic dad at weekends.

How did all this happen? Simon recalls what ignited his passion. “Well firstly there was of course the stunning character of Mariette played by Catherine Zeta-Jones in her first role before becoming a Hollywood star, and then there was the character of Charley, who was like me really, a bespectacled office worker trapped in a soul destroyed job, who experiences an awakening and transformation.

“I was living a frantic lifestyle, commuting to London, spending four hours on trains to and from the office every day and working overtime and weekends and I longed to jump off the treadmill. Charley’s journey from a wage slave to a magical, carefree life in the country planted seeds in my imagination.”

Having landed a respectable job with a major company straight out of high school, Simon, as a dedicated and hard-working employee, was quickly promoted to Customer Service Manager responsible for 120 staff and implementing systems.

Seduced by promotions, pay rises and perks such as a company car, private health cover, pension plan, bonuses and shares, he felt “trapped by golden handcuffs” for 14 years.

Recognising his talent and upper management potential, the company sponsored Simon to do an MBA. But armed with his business qualifications, Simon, at 32, was ready to break free into a new career as a creative entrepreneur.

Parallel to his corporate life, Simon was a musician playing keyboards in a rock band. It was driving home, elated from a Coldplay concert in Brighton, he had a stroke of genius to create a tribute band called Coolplay.

“We went from being a pub band, getting a hundred quid playing to 70 people to suddenly getting paid two thousand quid to play for 2000 people backed by famous bands as support acts!”

And in 2003, he “foolishly or bravely” gave a friend £4500, the last of his redundancy money, to invest in property in Bulgaria, hoping his investment would yield £20,000 when Bulgaria joined the EU. When his sceptical friends started asking questions, he decided to write an e-book on ‘How to Invest in Bulgaria’.

Before long he had created a publishing empire from his spare room, hiring a team of writers to churn out How to Invest in property in Croatia, Slovakia, Slovenia, Florida, Turkey … 34 countries in total.

“When I ran out of countries, I thought ‘What else can I do?’ and I discovered that when you find a market where people are hungry for information, you can make money so I looked at other subjects.

“I saw that a lot of people were being made redundant and looking to start a business so I developed ‘How to Start A Business’ e-books. A friend was starting a cleaning business so I wrote about how to set up and run your own cleaning business. Another friend was a schoolteacher who worked around the world so I did a guide on How to Become an International School Teacher. Another friend ran a home secretarial service. I produced guides for start-ups and also hobbies and interests such as a DVD training course in yoga.”

Simon made his first million in 18 months selling more than 150 information products online from his website and having a ball playing in his band.

“And I was jumping on planes to America to attend seminars to learn about the Next Big Thing in internet marketing and discovered the concept of membership sites and started a website offering independent reviews of franchises and business opportunities for subscription fees. This was hugely successful, turning over £2000 a day.

“I went on to sell physical products such as air conditioning systems from a website. I then became a licensed online gambling operator for fundraising for sports clubs. I’ve had to continually reinvent myself and learn as I go!”

But there was more astronomical success to come as an acclaimed public speaker telling his rags to riches story with thousands of people in lavish venues around the world. He shared the O2 Arena stage with famous speakers such as Anthony Robbins and Bill Clinton.

By the age of 40, he’d generated more than £12 million from his online businesses and was living his boyhood dreams of buying himself a Porsche and Ferrari – that he now admits was “vanity over sanity!” – and hanging out with his hero Sir Richard Branson and other elite guests on his private tropical island, cruising the ocean in his luxury yacht.

“I was just an average guy who made a leap of faith and left a job I hated and started a bedroom business and made millions!” Today he operates eight companies including an international internet business school.

And now this “average guy” with the Midas touch is all set to make more magic! Simon has a grand vision for the Darling Buds Farm over the years ahead. He sees the gruelling restoration work as a “labour of love and a lasting legacy”.

He hopes that guests of his beautiful accommodation will boost the local economy by visiting pubs and restaurants and tourist attractions in the picturesque district.

He will continue the popular Classic Car show held annually in July, now in its 20th year, with Pop Larkin’s canary yellow Rolls Royce as an irresistible draw card for Darling Buds fans and car enthusiasts.

In 2015 the peaceful farm will host retreats for songwriters, artists, entrepreneurs and health and fitness lovers. And in the future he hopes to host an array of tasteful functions, romantic weddings and fun-filled events.

Simon will fill the glorious green fields with glossy horses and adorable farm animals to delight children and adults. He plans to develop the orchards, strawberry fields and vegetable and flower gardens and protect the precious pockets of woodlands.

With so much open land, he envisages offering ‘glamping’ in comfortable shepherd’s huts and imagines that ramblers will be in their element exploring the nature trails topped off with a luscious Ma Larkin-style cream tea!

And in May 2016, to mark the 25th anniversary of the Darling Buds of May phenomenon, Simon hopes to entice the stars, Catherine Zeta Jones, David Jason, Pam Ferris and Philip Franks to join legions of fans in a grand celebration down on the farm, complete with Ma’s Larkin hearty food, warmth and hospitality and spectacular fireworks. As Pop would say, just “perfick”.

Classic Car enthusiasts and anyone who enjoys a fun day out will be in heaven at The Darling Buds Classic Car Show in Kent on Sunday July 5, 2015.

The gates open at 10am with more than 900 classic cars and a vast array of stalls and a fun fair for the children.

The Classic Car show, organised by the Rover P5 Alive Club, is in its 20th year at the idyllic Darling Buds Farm where the famous Darling Buds of May TV series was filmed.

This is one of Kent’s most popular annual attractions, not to be missed! And there is plenty of parking!

Diane Priestley is a seasoned journalist with a career spanning over 30 years writing for newspapers, magazines and online publications in Australia and the UK. She is also a qualified counsellor and specialist writer in developmental psychology, healthy lifestyle and humanitarian issues. She moved to London in July 2009 and now lives on the seafront in Folkestone Kent. She loves to travel in the UK, Europe and Africa, vegan cooking, gardening, growing fruit trees and veggies, listening to favourite music - folk, country and romantic ballads.
Last modified: June 9, 2021

Next Story
Eat yourself well with the seasons