The Jurassic Park franchise reaches its finale in Jurassic World Dominion, but is it any good?

This summer we’re being encouraged to experience the epic conclusion to the Jurassic era – the showpiece finale to the dino-franchise that has gripped audiences for the best part of three decades. Jurassic World Dominion hits screens across the nation today with all the noise and razzamatazz you’d expect of a Universal Pictures summer blockbuster – but there’s a catch, it’s not very good.

This film, like the dinosaurs of the original Jurassic era, has failed to evolve and grow into anything other than a gigantic, noisy throwback.  Back then the dinosaurs had the excuse that a giant space rock hit the planet and wiped them out before they could evolve – maybe it would have been a mercy had the same happened to director Colin Trevorrow and co because other than nostalgia value this film offers very little else.

We’re four years on from the erupting volcano that provided the backdrop for the destruction of Isla Nublar in Jurassic World: Fallen Kingdom and the dinosaurs that were rescued are now loose in society and surprise, surprise they’re a little bit dangerous, but that doesn’t have much bearing on the plot lines.

Chris Pratt returns as dino-wrangling, raptor-boy, Owen Grady, and Bryce Dallas Howard as Claire Dearing (she who should be serving time for corporate manslaughter following the catastrophe in Jurassic World, but let’s not go there) have gone off-grid to protect a clone from falling into the hands of the unscrupulous tech/science magnate and CEO of murky gene splicers Biosyn, Lewis Dodgson (Campbell Scott. The clone in question doesn’t have claws and sharp teeth because it is a girl – Maisie Lockwood (Isabella Sermon), the teenage clone of Jurassic Park co-founder Benjamin Lockwood’s daughter.

Oh, and they’ve also squirrelled away Blue, the genetically modified, super-intelligent, very deadly velociraptor that is now capable of asexual reproduction thanks to a cunningly inserted explainer scene.

Not quite, nasty mercenaries controlled by Dodgson are tracking Grady because they want the raptor and suspect he has Maisie. Luckily for them and the scriptwriters, they kill two birds with one stone and merge the all the storylines: one captured baby raptor (cue angry raptor mummy); one captured cloned human (cue equally angry surrogate parents); one uber bad guy identified (yes, it’s Dodgson).

Concurrent to this, swarms of prehistoric locusts are devastating the world’s grain supply, prompting the original dino dig team of Ellie Sadler (Laura Dern) and Alan Grant (Sam Neill) – from Jurassic Park 1 – to set off in search of answers. No prizes for guessing who’s behind the genetically modified pestilence, yup it’s our friends at Biosyn, where chaos theory mathematician Ian Malcolm (played by Jeff Goldblum) is shocked and appalled to discover he’s been working for the evil genius all along. Grrrrrrr!

In my opinion, Jurassic World Dominion tries too hard to be a blockbuster and does it in all the wrong places. The character relationships are under-developed and poorly scripted and the film relies on the action as a distraction from this. True, the dinosaurs, the volume and the action sequences are the biggest yet, but like the dreadnoughtus (one of the slow long-necked ones) that pops up early in the film, it’s a lumbering ungainly giant. Fans of the franchise’s earlier films enjoyed the simplicity and ground-breaking use of CGI. But we’re decades on from that and the format hasn’t shifted at all.

In fact, some of the sequences in which the actual actors interact with the prehistoric actors are painfully lifeless and are not helped by injecting throw-away lines from past films for comedy value.

Jurassic Park brought a story and characters that audiences could care about. Jurassic World Dominion left me wishing for an extinction-level event.

This review is reproduced courtesy of OnTheBox.com. 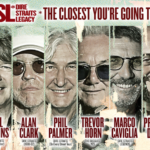