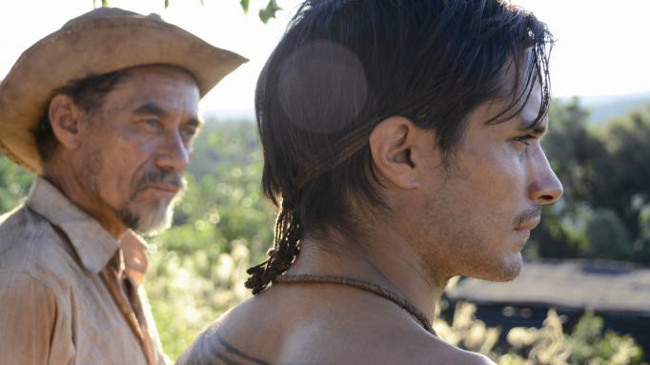 The spirit of Sergio Leone lives on in Pablo Fendrick’s taut but clichéd the Burning (national release) which offers more than a nod to Spaghetti Westerns of the past.

A mysterious tattooed stranger emerges from the Argentinian rainforest  to rescue the kidnapped daughter of a poor farmer from a band of murderous mercenaries who are after her father’s land. Fleeing into the woods, the pair form an instant bond before our stranger turns into a jungle warrior, harrying the invaders – whose ploy is to set fire to the farmer’s property to force them out – with an arsenal of traps and hastily fashioned spears. Initially cowed, the farmers, themselves, soon muster up the courage to help him, setting off a cat-and-mouse game where the hunters eventually become the hunted.

This is a film that is strong in atmosphere but short on plot, with a complete absence of character development, and the use of ponderous slow-motion at times. Dialogue is reduced to a minimum with emotions mapped out on the characters’ faces as they watch, wait and glare at their enemy in a tale of unfolding revenge. The tension, though, is ratcheted up in several sequences, most notably when a peaceful meal around a camp fire is shattered by the sound of gunfire as three men suddenly appear from nowhere, brandishing rifles and bringing death in their wake.

Gael Garcia Bernal brings a certain charisma to the role of the stone-faced outsider caught up in a bloody war from which there is no escape, while Alice Broga brings a certain fevered intensity ti the woman-in-peril role.

Furthermore the film is visually striking with some stunning landscape photography and a strong sense of mood and atmosphere. If you like Westerns you’ll probably enjoy this!

Laurence is 50connect's theatre and film critic. When he’s not at the Menier, National or the Old Vic, Laurence binges on films around the West End.
Last modified: July 1, 2015

Previous Story
Eat yourself well with the seasons
→

Next Story
Breaking the taboo of stress urinary incontinence