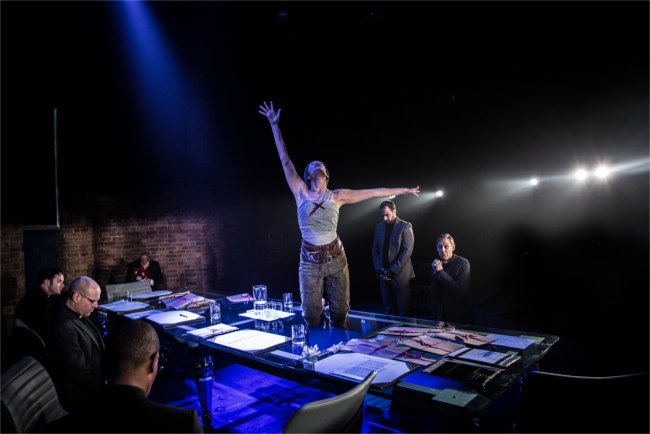 This modern dress version opens with our remarkable heroine occupying a platform in the middle of the stage. Brandishing a sword, she prays, while on screens behind, her poppy petals fall and an unnerving question looms – “Must a Christ perish in every age to save those who have no imagination?”

But then abruptly we move from the 15th century into a corporate world of boardrooms and laptops where jittery stock market reports are projected on giant screens. While the still very medieval-looking Joan burns with Zeal, the men who surround her are suited drones obsessed with strategy and protocol. They react to her with violent, disgust, condemning the way she dresses and accusing her of being a witch. The story then unfolds through a series of set pieces: Joan, the young peasant girl who hears voices telling her to lift the siege of Orleans and defeat the English invaders, inspires the troops and in particular the Dauphin who she helps crown King of France. But she is betrayed, captured by the English condemned as a heretic and burnt at the stake.

It took nearly 500 years until 1920, just three years before the play was first performed, that Joan was finally canonised.

This is a play dealing with such weighty issues as the relationships between religion and war, conviction and politics, intransigence and diplomacy, authority and resistance and the power of the individual and the responsibility of the collective. Yet these issues lose their edge through Rourke’s muddled treatment. Indeed it is a work packed with debate, and on a slowly revolving set, the arguments so loved by Shaw developed ponderously, although Shaw’s observations about class, gender and nationalism still resonate.

It is not quite clear, however, what Rourke is trying to achieve by having her traditionally dressed Joan wonder through the modern world, a woman stranded in time? Is the director suggesting the Saint was as out of place then as she would be now? Is Rourke trying to emphasise the world she was born into then was, as it is now, dominated by men? This treatment faith to provide an insight into Joan’s plight and is more of a mash-up than full-on update, a curious blending of a very specific present and a past that never really achieves synthesis.

However, Gemma Arterton brings a bright vitality to the central role of the French Martyr, conveying the quiet fanaticism of this awkward outsider, a medieval peasant girl divinely inspired to become a soldier and liberate her country. Fisayo Akinade makes a cowardly, campy Dauphin, Rory Keenan a ruthlessly cold Inquisitor, Niall Buggy an aggressive archbishop, Hadley Fraser a lyall Dunois, and Jo-Stone Fewings a scheming, arrogant Warwick, while Elliot Levey brings sincerity and rigour to the role of Cauchon, the bishop who insists that Joan must have a fair hearing.

Playing at Donmar Warehouse until 18 February 2017, the production will be broadcast live in cinemas on February 16 2017, in partnership with the National Theatre Live.

Our aim is to provide content for 'grown-ups' bringing you the latest lifestyle, travel and recipes. Plus health and finance tips from our expert columnists. Have your say on stories that matter to you and enter our free competitions and most important of all, enjoy 50connect!
Last modified: January 6, 2017 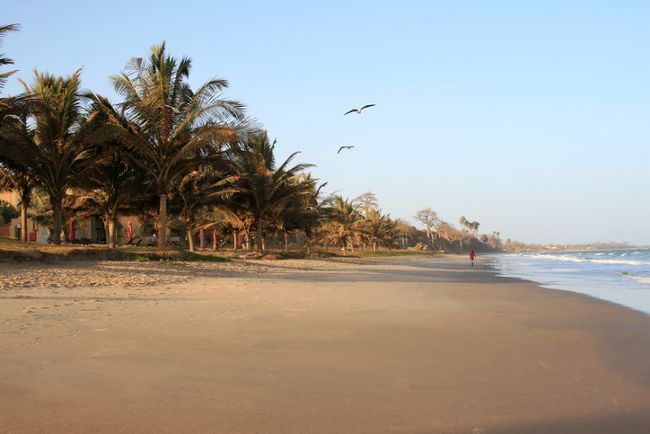 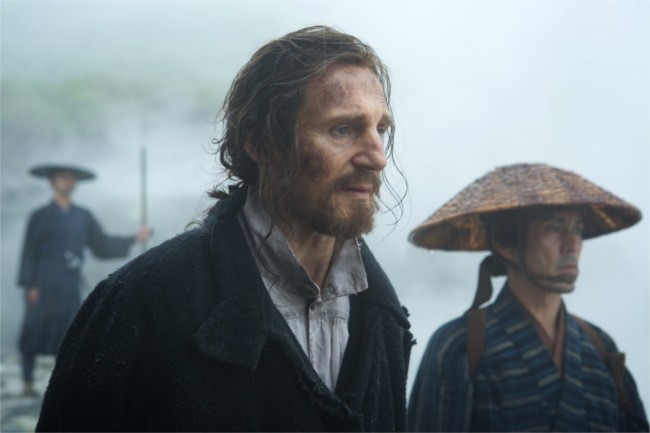