An authentic portrait of a Connecticut childhood complete with moonlit beaches firecrackers, booze and a dark undertow is provided by Eugene O’Neill in his rarely seen comedy Ah, Wilderness! revived in a new production, directed by Natalie Abrahami, at the Young Vic Theatre.

The time is July 4, 1908, where we spend the weekend with Nat Miller a successful newspaper owner, his wife Essie, mother to their four children, his prim sister Lily and Essie’s frequently inebriated brother, Sid, who lives with them. The second oldest son Richard, a ‘rebellious’ teenager comes to be the focus of the play, as he navigates young love in his idyllic home town.

This is a celebration of the American family, a gently funny tribute to life as it once was and how it occasionally still is. “For me it has the sweet charm of a dream of lost youth”, O’Neill observed, “a wistfulness of regret, s poignantly melancholy memory of dead things and people, but a smiling memory as of those who live – still being not sadly dead”.

The action indeed is framed in the form of a memory play, so we have an actor (David Annen) impersonating O’Neill in relatively advanced years, surveying the scene and at times stepping into the shoes of other characters – the reproving father of our dreamy, poetic-quoting hero’s girlfriend, and later the barman who serves Richard liquor in the cheap hotel he visits after being mistakenly dumped by his sweetheart.

This device, I feel, is a mistake, as it distracts from the drama being played out and creates a certain confusion, another miscalculation is the decision to relocate the family’s Connecticut home to a neutral sandpit, surrounded by stone arches. The design of an abstract, rolling wilderness of sand seems at odds with the air of domesticity conveyed by the play, and goes against the grain of O’Neill’s wishful thinking.

However this slender, tender tale gets string performances from a well chosen cast. George Mackay captures the wide-eyed innocence and insecurity of youth as Richard, by turns defiant engaging and vulnerable. Janie Dee is fine as his doting mother as is Martin Marquez as his level-headed father. Dominic Rowan as Richard’s amusingly sizzled uncle Georgia Bourke as the love of his life and Yasmin Paige as a predatory but brittle tart provide good support.

This, then, is a surprisingly sunny play for a playwright better known for his dark dramas, such as the masterpiece Long Day’s Journey Into Night, and if it doesn’t quite live up to expectations, it nevertheless provides an interesting addition to the O’Neill canon. 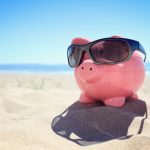