Ivo van Hove’s unsettling re-imagining of the Mankiewicz classic about jealousy and ambition, which asks why our fascination with celebrity, youth and identity never seems to get old. Laurence Green reviews.

It is one of the most iconic Hollywood films of the 20th century and perhaps an enduring, witty and profound encapsulation of the corrupting allure of stardom and nature of obsession cinema has yet produced.

Now Belgian director Ivo van Hove has brought Joseph L Mankiewicz’s multi-Oscar winning 1950 film All About Eve – which in turn is based on an earlier play by Mary Orr – to the stage (Noel Coward Theatre).

Margo Channing is a legend, a true star of the theatre. The spotlight is hers, always has been. But now there’s Eve, her biggest fan, young and beautiful, the girl next door. Eve Harrington arrives at the stage door, just after seeing Margo take her bow for the eighth time this week. Having been invited into the dressing room, her endearing nature lands her a job as Margo’s assistant, but alarm bells rings as the reasons behind her obsessions become clear. As Eve imposes herself on Margo’s life, the latter is haunted by the pressures of her age as she is usurped by the younger actress. Eve’s pulled the right strings to get where she wants to be and is transformed from fantasising while wearing Margo’s outfits backstage to living them out in reality as her understudy. But this story reminds us, whenever you think you’re at the top, there will always be someone over you, pulling your strings.

All About Eve is an unsettling play about jealousy and ambition which asks why our fascination with celebrity, youth and identity never seems to get old. Van Hove uses his trademark high-tech wizardry like an access-all-areas pass to tell the story. Roving camera operators film the  characters private moments and when we see their faces in intense close-up projected on a large video screen above the set, we can observe their desires growing darker. This multi-media staging, however, reduces the power and intimacy of the drama. Furthermore, while the script’s best lines are preserved, this re-interpretation misses a lot of the humour, charm and bite of the original.

But a few moments catch light, notably the brilliant scene where we see Margo and Eve staring into their dressing-room mirrors, while we see their faces ageing rapidly on the big screen above them. It is not a subtle commentary on the ageing process and the fate of actresses, but it is a surprising and ingenious one.

As the two actresses fuelled by ambition and narcissism you could argue that Gillian Anderson and Lily James as Margo and Eve respectively are being brutally honest about their profession and possibly even themselves. Anderson, playing the role Bette Davis made famous in the film, is cool and contained, lacking the grandeur that Davis brought to the role, and seems more brittle than ferocious as a woman coming to terms with the fact that she isn’t who she used to be. James, meanwhile, captures the cloying sincerity that makes Eve’s hunger for fame. Monica Dolan is razor-sharp as Karen, the friend who accidentally damages Margo’s career and Stanley Townsend has a finely controlled menace as suave theatre critic Addison De Witt.

But this production of All About Eve lacks the necessary spark and tension top leave a lasting impression.

For more theatre reviews visit our What’s on channel. 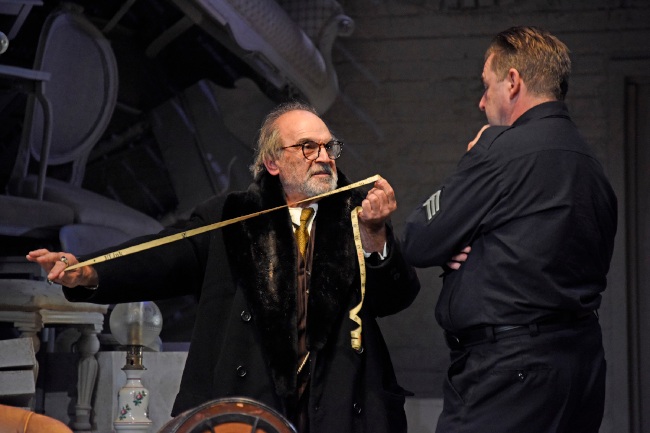 Next Story
Redefining how older women are viewed