It is a pleasure to welcome back to the West End stage after an absence of 40 years acting legend Angela Lansbury in a role perfectly suited to her talents, that is the eccentric medium Madame Arcati in Noel Coward’s sparkling comedy Blithe Spirit, revived in a superb new production directed by Michael Blakemore at the Gielgud Theatre.

In order to observe a spiritualist first-hand for a planned novel, writer Charles Condomine and his wife Ruth invite their friends, the Bradmans, to dinner and a séance with local clairvoyant Madame Arcati whom they are certain is a fake. Whilst consumed in a trance, Arcati unwittingly summons the ghost of Charles’s first wife, Elvira. Appearing only to Charles, Elvira soon makes a play to reclaim her husband, causing a rift between Charles and his at first disbelieving and then jealous second wife. The two feuding wives ghost and flesh, hatch plot and counter plot to sabotage each other’s and Charles’s existence – but will they succeed?

Coward’s wise and witty comedy of social mores contains as his work so often does, bitter grains of truth. The play, written during the Second World War, would have played to an audience who were all too familiar with the need to contact dead loved ones. Yet this piece is only incidentally about ghosts and the hereafter, it is really about marital discord in the present and continuing for all time.

Jemima Roper is suitably irritating as party-girl Elvira in platinum blonde bob and white night dress, a truly seductive spook who looks ethereal but unleashes a deluge of mischief. Janie Dee lends Ruth an air of steely ferocity and Charles Edwards manages to make Condomine both suave and petulant, a man initially intrigued by having two women fighting over him, but who soon develops an urge to be rid of them both.

But the star of the show is undoubtedly Angela Lansbury who steals every scene she is in, bringing both substance and comic panache as the clairvoyant Madame Arcati, and conveying the character’s self-importance as well as her frivolity.

A final word of praise must go to Simon Higlett’s plush, atmospheric set.

This certainly is a production of which Coward himself would justifiably have been proud.

Runs at the Gielgud Theatre until Saturday 7 June 2014

Previous Story
Never too late to begin a healthy lifestyle
→ 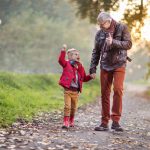 Next Story
Grandparents’ rights – or not?