Laurence Green visited the Traverse Theatre during Edinburgh Festival Fringe 2014 for some of the best new drama and shows.

Mention the Edinburgh Festival Fringe and you would be forgiven for immediately thinking of the Traverse Theatre for this is where some of the best new drama can be found and 2014 has proved no exception.

It is not surprising that the forthcoming referendum on Scottish independence was the hot topic at the festival with many shows on the subject. The Traverse itself plunged into the thick of it with John McCann’s timely two-hander Spoiling. In the front of the world’s media Scotland’s heavily pregnant new foreign minister designate, Fiona, is about to deliver a keynote speech outlining the newly independent nation’s relationship with the former UK. But there’s a problem. She’s refusing to speak the words she’s been given.

So they spring a little surprise on her in the shape of Henderson, a Belfast man born and bred, who was originally a civil servant in Northern Ireland. He has come to Scotland to make a new start and is determined that Fiona will stick to that speech and he brings a threatening message from the party bigwigs to ensure she does.

There is much to enjoy here in the banter between Gabriel Quigley’s wayward Fiona and the cautious Henderson (Richard Clements) and the manner in which they circle each other warily. But the play never develops much beyond an extended sketch which cries out for the characters and theme to be fleshed out in greater detail. However director Orla O’Louglin extracts strong performances from Quigley and Clements and the piece does at least lay bare the treachery of political language. The play can now be seen at the Theatre Royal Stratford East until September 13. 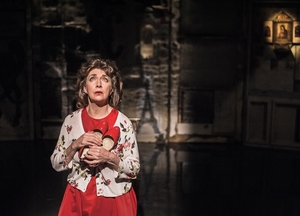 A poignant one-woman play is how you could describe celebrated Quebec dramatist Jennifer Tremblay’s The Carousel. On an emotional and shocking journey through her past, a woman calls on her dead grandmother to unearth buried truths. The voices of three generations – grandmother, mother and daughter are given breadth in this quest through a labyrinth of memories, thanks to a stirring performance from Maureen Beattie who goes through the gamut of emotions that each generation demands, under the expert direction of Muriel Romanes. Ultimately, joy prevails in a final ride on the carousel. 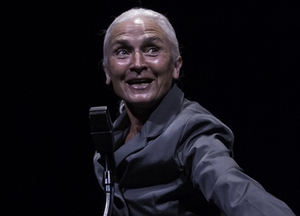 Olwen Fouéré, one of Ireland’s leading theatre makers, performs her acclaimed adaptation of the voice of the river in James Joyce’s Finnegan’s Wake, in the scintillating prose-poem Riverrun. In this unique approach to Joyce’s extraordinary ‘sound-dance’, Fouéré not only conveys the voice of the river within the latter section of the novel but also the flotsam and jetsam of lifealong its banks, the mythical characters born of the land, and the “real” people who will be buried within it. This cerebral stream-of-consciousness is certainly a challenging piece but Fouéré manages to generate a powerful transformative energy as she dissolves into the great ocean of time.

Fourteen years ago four women made an extraordinary decision: they decided to die. Ben Kidd and Bush Moukarzel’s play Lippy, created by Dead Centre provides a haunting investigation into why we tell stories in the face of tragedy. The piece, which won the Irish Times Theatre Award for Best Production in 2013, cannot be forgotten in a hurry. 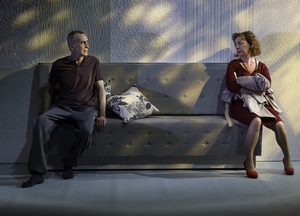 A stark and searing glimpse into the reality of relationships is provided by Owen McCafferty in his sparkling new drama Unfaithful, the best of the works in the Traverse’s festival programme. This play poses the question: can relationships withstand the brutality of betrayal? McCafferty skilfully intertwines the lives of four characters: two flatlining couples, 50-somethings Tom (Benny Young) and Jean (Cara Kelly) and 20-somethings Tara (Amiera Darwish) and Peter (Owen Whitelaw). The moment of connection comes when the seemingly self-assured Tara propositions Tom in a bar, and this initial encounter sets in motion a carefully controlled domino row of events, recounted in scenes that feature various combinations of the characters as they struggle desperately to communicate their needs and desires. Director Rachel O’Riordan keeps the drama moving at a brisk pace and elicits fine performances from her quartet of actors, most notably Young and Kelly who wonder whether it might not be better to give up after 30 years of marriage rather than carry on. This impressive play certainly deserves to be seen in London. 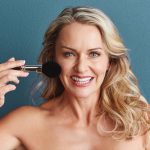