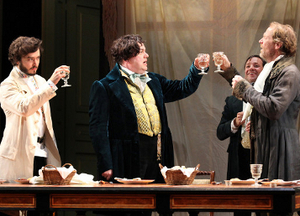 The action is set on a vast country estate over the course of 24 hours. After a long absence, 20-year-old Olga Petrovna, the young mistress of the estate, returns from St Petesburg with her new husband Yeletsky, a government official. They are welcomed by Kuzovkin, the penniless gentleman-in-residence, who has been living in the great house for 30 years, and adored Olga as a child. Their wealthy and odious neighbour, local landowner Tropatchov calls by for a seemingly innocent celebratory lunch. Fuelled by champagne, the proceedings degenerate and, humiliated by Tropatchiv, Kuzovkin gets wildly drunk, insults everyone and comes up with a shocking revelation which has far-reaching consequences.

Written in 1848 and initially banned by the imperial censors, the play can be read as an allegory of imperial despotism. Turgenev, best known for his work A Month in the Century, here vividly portrays the greed, corruption and viciousness of Russian provincial life. Mike Poulton’s fluent adaptation brilliantly balances comedy and drama and melancholy and absurdity, whilst capturing the play’s rich mixture of mood and tune. The opening scene is particularly memorable with the rush and bustle of the servants as they prepare for the arrival of the newlyweds and, when the linen cupboard is opened, the impoverished Kuzovkin who has been sleeping on the top shelf all these years, descends with both agility and dignity.

William Dudley’s evocation of a grand country estate with its sumptuous drawing-room, ornate chandeliers and sun-kissed garden (in the background) is both stylish and realistic.

Director Lucy Bailey extracts a marvellous central performance from Iain Glen who turns Kuzovkin, a man embroiled in a lawsuit so fearsomely complicated even he has lost the thread of it and how lives on the charity of the household, into both a comic and tragic figure who grows into a person of genuine moral stature. Richard McCabe also impresses as the monstrous, malicious dandy Troptchov, who exudes an air of fake sophistication. Strong support comes from Lucy Briggs-Owen as the warm-hearted Olga and Alexander Vlahos as her cold-hearted husband Yeletsky.

This then is an evening to cherish and certainly one of the best productions the Old Vic has staged in the past year. 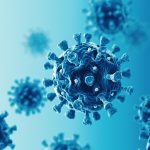 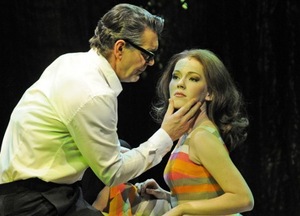