The hugely popular novel and film hits the stage and a bum note as Laurence Green reviews The Commitments at London’s Palace Theatre.

It has taken more than 20 years for Roddy Doyle’s hugely successful novel and hit film to reach the stage but sadly I have to report that James Lloyd’s brash and raucous production of The Commitments (Palace Theatre) has not been worth the wait.

We are in 1980s Dublin and blonde, clean-cut Jimmy Rabbitte, a young working class music fan, gets together an unlikely bunch of amateur musicians and after many trials and tribulations gradually turns this group of would be artistes into a successful soul band called The Commitments.

Set in the pre-X Factor era, this story of people galvanised by music certainly has pace and energy but the expletive-ridden dialogue and course humour I found generally unfunny, while the characterisation was thin. Furthermore, we are given little background detail, for example any mention of the bleak council estates and dead end jobs from which these kids are escaping to join a band that offers a real chance of hope, although Soutra Gilmour’s imaginative set does of a split-level glimpse of suburban Dublin.

Its saving grace is that we do get to hear lots of classic songs from What Becomes of the Broken Hearted to I Heard it Through the Grapevine when the struggling band eventually perform a rip-roaring concert.

The cast of which Denis Grindel manages to stand out as Jimmy, the ambitious, would-be manager of the group, certainly rises above the flimsy material. Two other notable performances come from Killian Donnelly as the difficult but talented lead singer and Ben Fox as an old-time trumpet player who claims to have worked with the American greats and teaches the budding young musicians their skills.

But this is a show in which, I’m afraid, noise and chaos triumphs over insight and involvement.

Runs at The Palace Theatre until Saturday 26 January 2014. 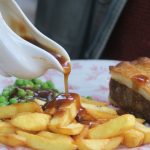 Next Story
From Here to Eternity