Laurence Green finds the new production of The Pajama Game to be a buoyantly blissful blend of romance and comedy.

It is not often that a musical comedy revival seems as fresh and sparkling as the day it was first staged but this is indeed the case with Richard Eyre’s scintillating production of the 1954 hit The Pajama Game, which following a sell-out run at Chichester’s Minerva Theatre, comes to the West End’s Shaftesbury Theatre.

The action is largely set in the Sleep-Tite Pajama Factory in the American mid-west, where workers agitating for a seven-and-a-half cents pay rise, face a bullying skinflint boss, a fanatical time and motion man and a tough new superintendent, Sid Sorokin, who promptly falls head over heels in love with the firebrand union representative Babe Williams in charge of the grievance committee. Soon there is an awkward tension between professional duty and personal feelings. Needless to say true love doesn’t run smooth but turns out just fine in the end.

Admittedly the show takes a short while to really get going but once it does it emerges bursting with energy, wit and invention. This is no fairytale musical but one routed in reality as we discover in the opening number Racing with the Clock, where we see the hard=-pressed factory employees working furiously at their sewing machines and steam presses. The exuberant music and lyrics by Richard Adler and Jerry Ross (book by George Abbott and Richard Bissell) includes such timeless songs as There Once Was A Man, Once A Year Day, Steam Heat and, best of all, Hey There (You With The Stars In Your Eyes).

The superb choreography by Stephen Mear is fast, furious and full of zest and perfectly matches the mood of the songs, never more so than during the famous number Hernando’s Hideaway, a tangy tune in a sleazy nightclub where the boss’s secretary gets so drunk that her head keeps falling on to the table with a resounding thud.

Eyre’s cast couldn’t be bettered. There is a real spark between the two leads with Joanna Riding bringing a mixture of determination and good nature as the passionate Babe, and Michael Xavier displaying an abrasive charm as Sid the factory supervisor who sacks her for agitation. Strong support comes from Peter Polycarpou as the time-and-motion man, prone to knife throwing fits of jealousy and Alexis Owen-Hobbs as the dizzy blonde secretary who is the object of his desire.

In short then this buoyantly blissful blend of romance and comedy will send you out of the theatre with a skip in your step and a smile on your face.

Runs at the Shaftesbury Theatre until Saturday 13 September 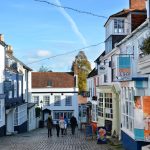 Next Story
Under a Croatian Sun