Women on the Verge of a Nervous Breakdown

HomeTheatreWomen on the Verge of a Nervous Breakdown

Laurence Green sees a madcap musical that doesn’t cut very deep but certainly provides an entertaining evening in the theatre.

Love and betrayal and heartbreak and jealousy are the elements that fuel the plot of the madcap musical comedy Women on the Verge of a Nervous Breakdown (Playhouse Theatre), adapted by Jeffrey Lane and David Yazbek (score and lyrics) from Pedro Almodovar’s celebrated 1988 film.

The main character is Pepa, a Madrid makeover actress, whose lover, Ivan, has abandoned her and thrown her into a tailspin. As Pepa wrestles with her feelings about his faithless excesses, she finds herself at the centre of a whirlpool of messy, intersecting lives involving Ivan’s mad, vengeful wife Lucia who has just been released from an asylum after 20 years, his son Carlos and the son’s fiancée Maria, as well as a fashion model friend, devastated to discover she is dating a Shi’ite terrorist.

A 2012 New York staging did not fare well, but this London production has been completely reworked by director Bartlett Sher. It is a show that takes too long to look at ease – the stage is often bustling with many characters at the same time and the whirlwind pace breaks our emotional involvement. You could say it is very good in parts, weak in others, but never boring.

But it is the performers that really bring the show to life. Tamsin Greig, making her musical theatre debut, perfectly captures Pepa’s mix of clumsiness, disappointment and fury and providing the emotional core. Haydn Gwynne is fierce, poised and sad as Ivan’s deranged gun-toting ex-wife Lucia, while Jerome Pradon is convincing as the faithless Ivan. Fine support comes from Haydn Oakley as Ivan’s randy son Carlos, Seline Hizli as the upright fiancée Marisa, Anna Skellern as the suicidal model Candela and Ricardo Afonso as a taxi driver, with whom Pepa shares her deepest intimacies.

This giddy musical farce may not cut very deep but it certainly provides an entertaining evening in the theatre.

Women on the Verge of a Nervous Breakdown 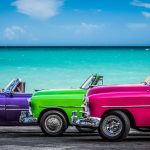