Laurence Green reviews Visitors, Barney Norris’s feature about ageing, a play that is by turns funny, tender and desperately sad.

Few modern plays address the subject of ageing and certainly without the humanity insight, wit and pathos that 27-year-old Barney Norris brings to his first full-length drama Visitors (Bush Theatre).

The action is set in a farmhouse at the edge of the Salisbury Plain where long-married, seventyish couple Arthur and Edie are slowly falling into decay. Arthur feigns robustness but is prone to falling down, while Edie’s mind is starting to go, showing all the symptoms of dementia. The sedate rhythm of their lives changes with the arrival of a young stranger Kate with blue hair, who moves in to care for Edie. But their quasi-estranged son Stephen is determined to put his mother in a home and sell the family farm. The family are now forced to ask: are we living the way we wanted?

This is a drama which skilfully eschews sentimentality and mawkishness to take a haunting, beautiful look at the way our lives slip past us. Edie’s description of her condition, as being like a dam that never opens so that the freshly stored water never flows out, is an emblem for the entire play in tis modest eloquence. Furthermore Norris draws a thought-provoking contrast between the old couple, who despite their present difficulties, are firmly bound together in a happy and enduring marriage – there is something infinitely touching about their shared past – and the younger generation who despite their good health, face a lonely and uncertain future. In Stephen’s case his marriage has failed and his wife has filed for divorce. Indeed Norris captures with great perception the slippage between different generations, with our changing expectations of what we want-and deserve – from life.

Director Alice Hamilton fluently confident production for the touring Up in Arms company, has an outstanding central performance by Linda Bassett as Edie, who perfectly captures the character’s sudden shifts from rambling reminiscence to razor-sharp perception. Robin Soans also impresses as Arthur, occasionally cantankerous but tirelessly loving towards his wife. Strong support comes from Eleanor Wyld as the kindly, confused Kate, and Simon Miller as the heartless, insecure Stephen, rejecting farming in favour of middle-management in life insurance.

In short this is a play that is by turns funny, tender and desperately sad, which I feel will strike a chord with many theatregoers. 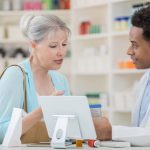