Last month Storm Ciara battered the UK and Ireland, and RNLI lifeboat crews braved the rough seas and strong winds to answer the call for help 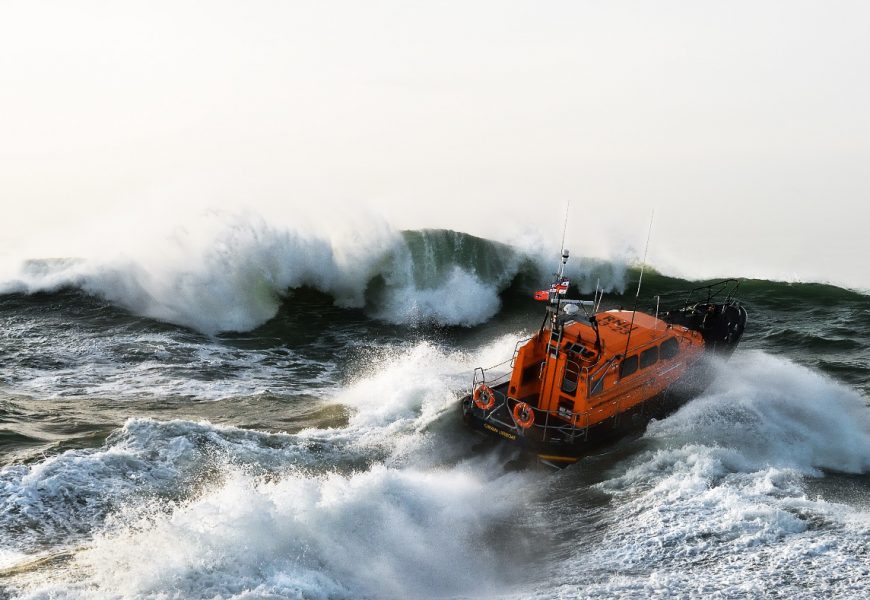 Our volunteers launched to save complete strangers – a surfer, two divers, a person in need of medical attention on a tanker, and a fisherman

Hastings lifeboat crew battled the waves after reports came in of a surfer in trouble on Sunday 9 February. In the picture above, you can see the lifeboat in the choppy seas that shows just how severe the conditions were. Seconds before, the lifeboat had nearly capsized. Thankfully the surfer was able to make their own way to safety and the lifeboat and crew were all okay.

That same weekend, Falmouth lifeboat crew were asked to evacuate a person who needed medical attention from a tanker. They launched the relief Severn class lifeboat Volunteer Spirit just after 2pm and, fighting force 7 winds, the crew transferred the person onto the lifeboat for taking him back to the lifeboat station, for further medical attention.

Oban lifeboat launched twice on the Saturday when the storm was brewing. The first service was to a group of divers who were reported to be in difficulty south of Oban. The lifeboat arrived on scene in the rough conditions, but were stood down as the divers had already been assisted by a coastguard team. The second launch came shortly after they returned to station, when one of the crew spotted a dinghy loose in the harbour. They launched to ensure no-one was onboard. Spotting a name on the side of the dinghy, the coastguard were able to locate the owner who was safe and well onshore.

Llandudno lifeboat were tasked to assist a fisherman who was having difficulty returning to shore. The inshore lifeboat and her crew were able to locate the fisherman and ensure he was all safe and well.

When the call to rescue comes in, RNLI lifeboat crews are ready to launch. 24 hours a day, 365 days a year. Even when the conditions would cause most to turn back. If someone needs their help, they will do all they can to rescue them. But they can only do it with support from people like you.

6/10 Lifeboat launches are only possible from Gifts in Wills. They help to provide the kit, training and most reliable Lifeboats possible to bring our crews back safely. Find out how you can have your Will written or updated for free, or request our free Gifts in Wills guide here or call us on 0300 300 0124.