A knockout performance from Imelda Staunton lights up Jonathan Kent’s revival of the classic musical Gypsy at The Savoy Theatre says Laurence Green.

One of the all time great musicals Gypsy is back in the West End (Savoy Theatre) ina superb production directed by Jonathan Kent, following an acclaimed, sell-out run at the Chichester Festival Theatre.

Based on the memoirs of legendary burlesque entertainer, Gypsy Rose Lee, this 1959 musical tells the tale of Momma Rose and her daughters, baby June and Louise, trekking across America in the 1920s and 1930s with their family vaudeville act, But times are changing, audiences are expecting more and the two girls have their own ambitions in mind. The rise of burlesque is beginning to displace the vaudeville act at which they have excelled and nothing will ever be the same again for Mammy Rose.

There is something initially comic about Rose’s bustling opportunist who bullies management into booking “baby June”. But we also see the monstrous side of a woman ready to sacrifice her children and her last hopes of marital success for the elusive pursuit of fame, so that by the time she sings the final number Rose’s Turn on an empty stage we feel this is a woman in the throes of a nervous breakdown.

With a book by Arthur Laurents, music by Jule Styne and lyrics by the incomparable Steven Sondheim, this polished, engaging musical combines wit – “after three marriages I am ready to enjoy myself” says Mamma Rose at one point – with a marvellous score that features such classic songs as Let Me Entertain You, Together Wherever We Go and, of course, Everything’s Coming Up Roses.

There is no denying that the star of the show is undoubtedly Imelda Staunton who delivers a knockout performance as the resourceful, ruthless and ultimately vulnerable Mamma Rose. She is indeed a force to be reckoned with, blazing through every scene with her belter of a voice and charisma to match. Lara Pulver (Sherlock’s Irene Adler) also impresses as her criminally over-looked daughter Louise who steps into the spotlight as Gypsy Rose Lee, charting Louise’s growth from shy wallflower to glamorous stripper with great skill. Strong support is provided by Peter Davison as Mamma Rose’s devoted companion, Herbie, and further praise should be given to the rest of the cast who display spot on timing and manage to bring their characters fully to life.

Furthermore Anthony Ward’s sets and costumes succeed in evoking the tackiness of the touring vaudeville circuit of the time, where children were mercilessly exploited, while the lighting by Mark Henderson does full justice to the production numbers.

It is hard to understand why this musical has been absent from our stages for 40 years but make no mistake this dazzling revival is an out and out winner!

Plays at the Savoy Theatre until Saturday 18 July 2015 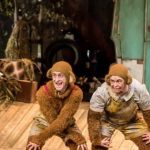 Next Story
It’s never too late